Stand at the triple-arched Tingis gate, the northernmost of the entrances to Volubilis and look down the wide sweep of the Decumanus Maximus, the main thoroughfare. The remains of pillars and square stone blocks that once marked the entrance to colonnaded shops look, when viewed side on, like rows of regimented tombstones in a graveyard, blackened with age.

At the bottom of the single row of well-worn and uneven paving slabs, all that is left of a paved avenue, sits the triumphal arch of Emperor Caracalla. To your left, the remains of the most important public spaces; the Corinthian columns of the Capitoline temple, raised by a flight of thirteen steps; the Basilica, the courthouse and government administration, alongside which is the Forum, the 1,300 square metre market place, originally lined with temples, small public offices, and niches containing statues of emperors and local dignitaries. All with the backdrop of long, long vistas, once overflowing with olive groves, and wheat fields.

Defocus your eyes slightly and imagine the scattered stone blocks magically rising to form walls, the pillars assuming their rightful place at doorways and porticoes, with the tumbled acanthus leaf pediments topping them off. Roofs fly into place, shop doors and shutters appear. Slowly you begin to see movement as people go about their daily business. A donkey brays, cocks crow and the burble of conversation drifts on the wind from the market. The town comes to life, becoming more than just a pile of scattered ruins, but a living, breathing, thriving community.

Volubilis is undoubtedly the finest Roman ruin in the whole of Morocco, but before they set up camp in 45AD, when Emperor Claudius officially annexed North African Mauritania, a settlement of Carthaginian traders had been there for almost three centuries. The city was the end of the imperial road in one of Rome’s most remote outposts, as the legions at Rome’s command were never able to subdue the Berber tribes of the Atlas. 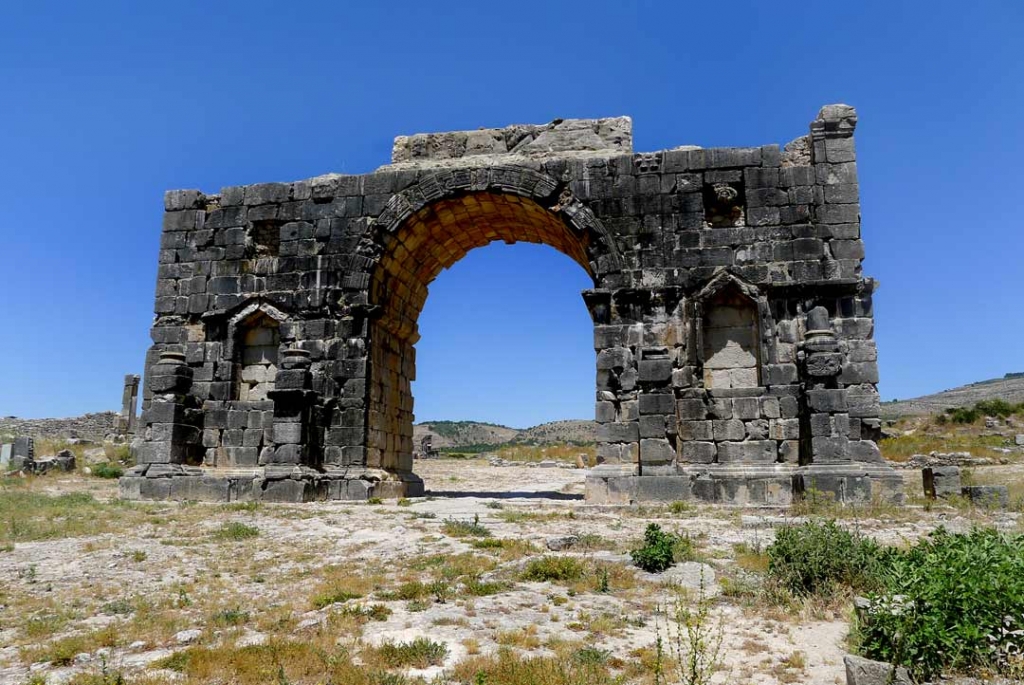 A little over two centuries later, in 280, Roman rule collapsed when the empire almost disintegrated through internecine warfare, assassinations and palace coups. Volubilian sharp cookies, aware of the upheaval, buried their hoards of money and fine bronze statues under their villas for safekeeping, which only saw the light of day again 1,700 years later when they were unearthed by archaeologists. But Roman internal disorder wasn’t the end of the city, and when the Arabs arrived in 708 they found it peopled with Greeks, Berbers, Christians and Jews, many of them descendants of those who had fled the persecutions and heavy taxes of the late Roman Empire, and still with Latin as the lingua franca.

In its heyday, Volubilis was an affluent provincial capital of around 20,000 people, its wealth based on the export of olives, olive oil and wheat to Rome, and wild animals to face the gladiators in arenas throughout the Roman Empire. It’s said that during their two-hundred-year occupation not only was Volubilis one of the gems of the Roman Empire in North Africa but it was also the site of a major ecological disaster. Vast swathes of forests were cleared to create space to grow the enormous quantity of wheat needed to meet the annona, the free grain allowance that was every Roman citizen’s basic right, while the hunting of wild animals for gladiatorial games almost drove indigenous species such as the atlas bear and the barbary lion into extinction; both sides of the ‘bread and circuses’ coin by which the emperors controlled the population.

The value of olive oil to the commercial viability of the city is shown by the fact that fifty-eight oil presses have been discovered, and some of the grandest mansions even had their own. As well as its culinary uses it was used for lamps, medicinal purposes and for cleansing while bathing. The residue of the olives from the pressing was used as animal feed or dried to provide fuel for the bathhouses. Like most Roman cities, Volubilis had a complex water system that flowed below the Decumanus Secundus, (a street that ran parallel to the main thoroughfare) from a spring in the hills behind the city and supplied baths and houses, while a series of drains flushed waste water and sewage into the nearby river. 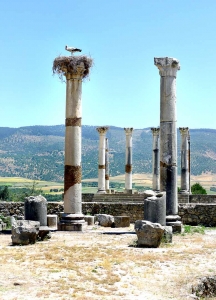 The importance of Volubilis is displayed in the beauty of its buildings. The Basilica, in its time one of the finest Roman basilicas in Africa, originally had two floors, and was the hub of the city’s legal administration. Beside it, the Capitoline Temple held great sway in public life as it was dedicated to the Roman state’s triumvirate of divinities; Jupiter, King of the Gods and god of sky and thunder; the warlike Juno, protector and special advisor to the state; and Minerva, goddess of wisdom and sponsor of arts, trade, and defence. Assemblies would be held before it to call on the gods for aid or to thank them for the successful completion of the more important civic undertakings, one of the primary ones being fighting wars.

The Decumanus Maximus was the commercial heart of Volubilis, (and also the best address). A grand paved avenue, it had arcaded porticoes shading its sidewalks on either side, and dozens of shops for the residents of this upper class neighbourhood to browse during their daily promenade. You will occasionally see small stone blocks with images carved on them scattered on the ground; these would have been the shop’s sign, to indicate its wares, or, in the case of a carved penis and genitals, a brothel.

It’s behind these shops, in the mansions of the city’s elite, that some of the jewels of Volubilis can be found, the mosaics with their dominant themes of Greek myths that make this Roman outpost so important, (although a significant scene can be found in the House of the Athlete near the triumphal arch, a mosaic that depicts an athlete facing the wrong way on horseback having been awarded a prize in a ‘desultory race’; not a lethargic race, though, as a ‘desultor’ was an equestrian acrobat of the Roman circus whose specialty was jumping from one horse to another or standing astride two horses at full gallop).

Look for the solitary cypress tree to the east of the Decumanus Secundus and follow the narrow streets between the memory of walls that were once the homes of the rich and notable, and you arrive at the House of Venus, one of the most luxurious residences in the city. The mosaic for which the house is named is now in a museum in Rabat, but two extant mosaics show the sensual side of the art. The Abduction of Hylas by Nymphs shows Hylas, Hercules’ ‘companion’, dressed in nothing more than a deep orange robe and a headful of cascading blonde locks, being abducted by two water nymphs, a theme that has endured in Western classical art, while the slightly more salacious mosaic shows Diana, goddess of the hunt, being surprised by the hunter Actaeon while bathing. Actaeon was probably equally surprised when the goddess punished him by turning him into a stag. Unable to explain his predicament to his hunting friends he was tracked down by his own dogs and killed. Perhaps it would have been if Diana had used a bigger towel.

As grand as the ruins of Volubilis are, they would have been grander still but for two events; the 17th century pillaging of the site by Moulay Ismail for marble columns and artistic architecture to adorn his sumptuous palaces in Meknes, and the earthquake in 1755 that flattened Lisbon and left Rabat’s Hassan Mosque as little more than rows of pillared stumps. 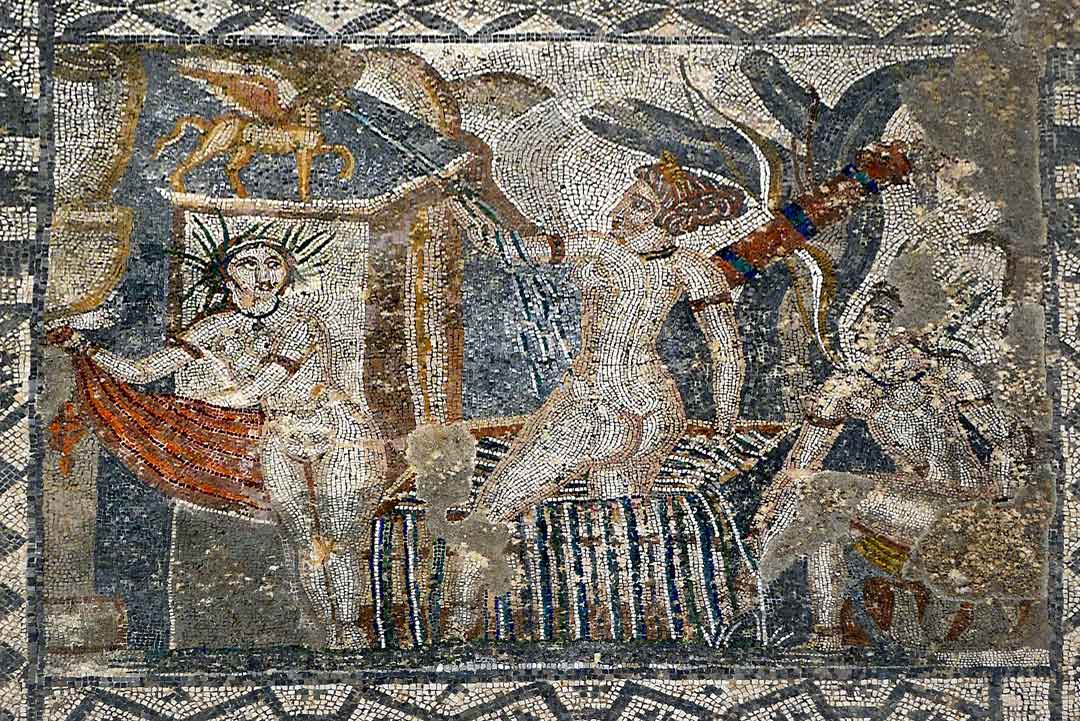 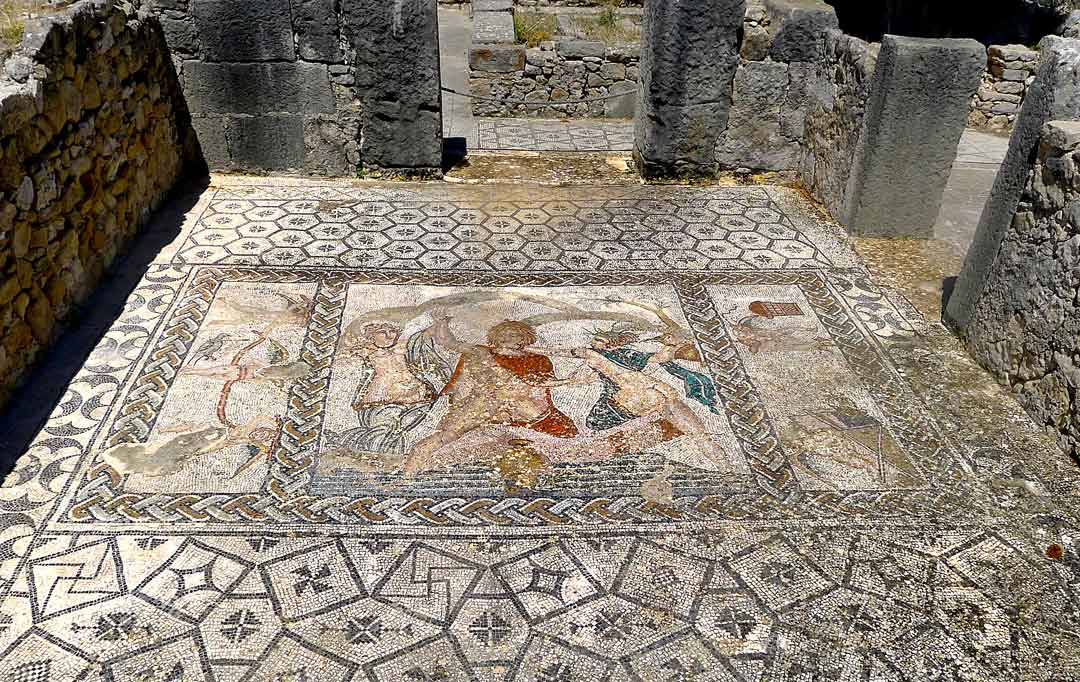 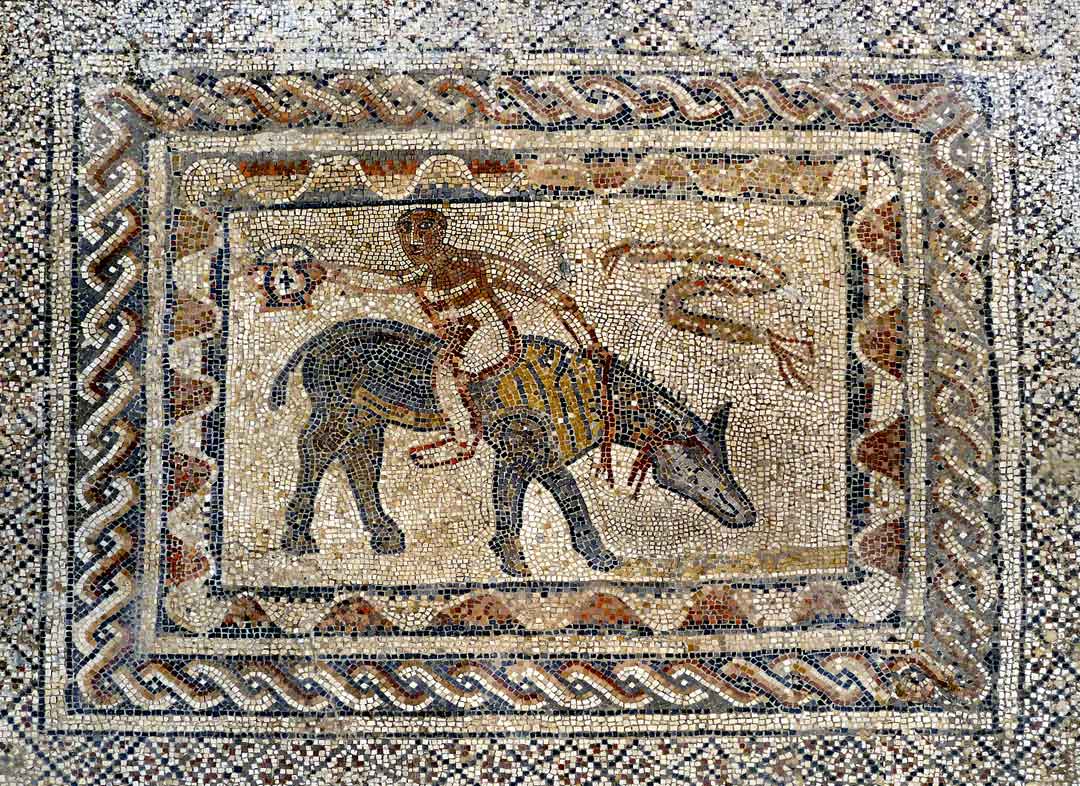 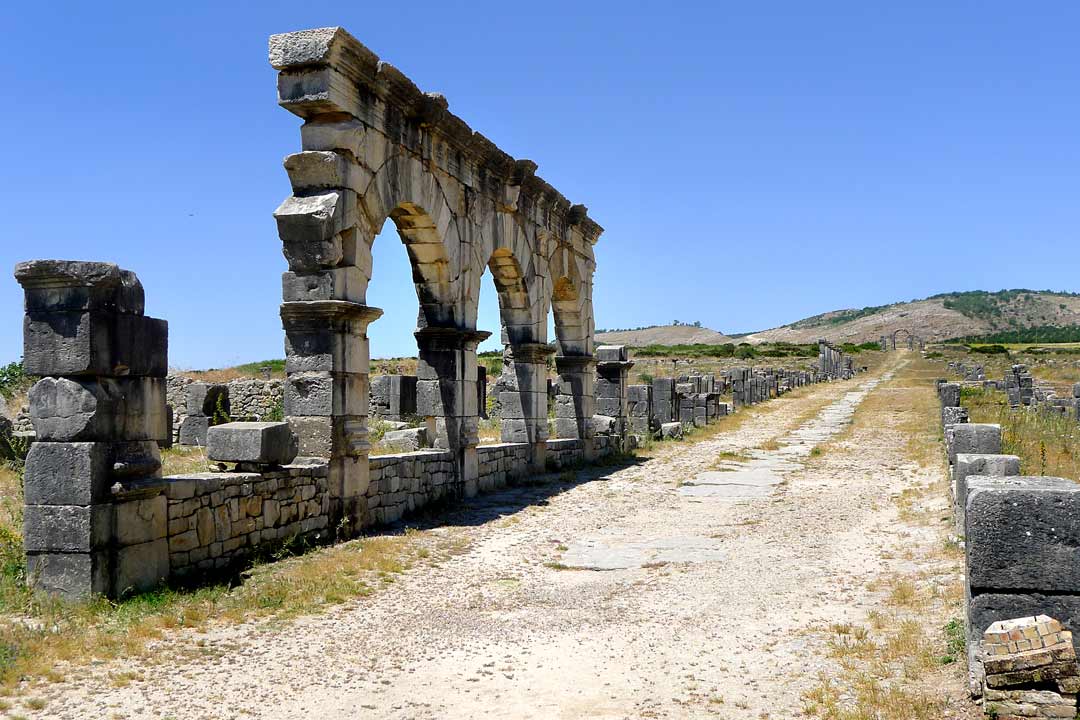 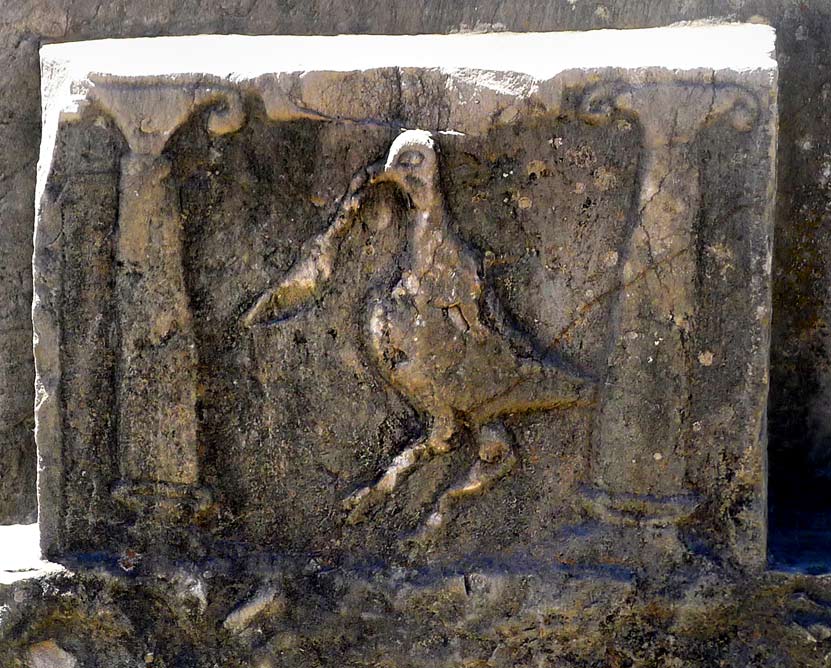 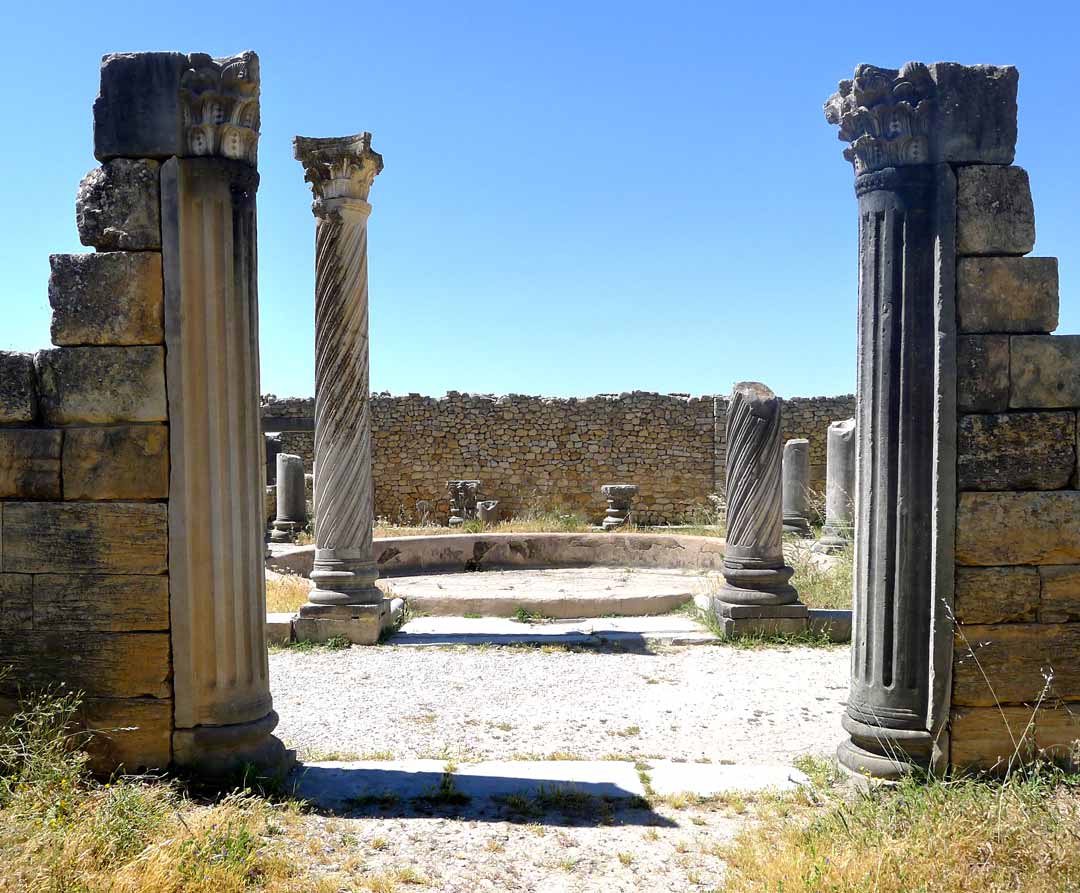 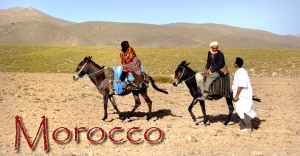