When compared to the street bustle of Bangkok’s Chinatown, the word ‘frenetic’ would indicate a pace of peace and tranquility.

Soi 6 off Yaorowat Road draws you into a world of Chinese gastronomy, some of which you will recognize, most of which, the greater percentage in fact, you won’t; teas of every blending, dried mushrooms of all varieties, great vats of pickled things, cabbages fit for kings. 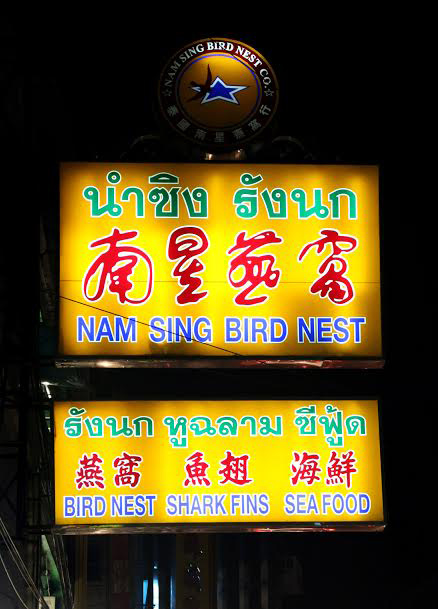 e alleys take you into the bowels, where no health and safety inspector dare tread – but where I find the fresh ginger I’ve been searching for, sold to me by the caricature of ancient Asian lady as depicted by Hollywood, a hump-backed old crone who cackles a figure at me in Thai that I obviously have no comprehension of. I hold up a green 20baht note and she hands the ginger over with a ‘that’ll do nicely’ glimmer in her eye. Probably three time what she’d charge a local, but a bargain for me because all I’ve seen elsewhere is the dried variety that never reconstitutes to anything other than a slightly spicy shoe leather. While I’m waiting for my ginger to be bagged a Thai man walks behind me whistling ‘Jingle Bells’, curious from a resident of somewhere where snow and sleigh bells aren’t part of the usual cultural mythology.

Each turn takes you deeper into squalor. It may be the 21st century, but in Bangkok’s Chinatown I feel like Charles Dickens on a foray into the sulfurous underbelly of 19th-century London.  Barely a hundred metres from the gold shops and screeching traffic of Yaorowat is a world of boys portering huge sacks of rice (although these days on trolleys and not on their backs), and the detritus of filthy rags lying in runnels of scuddy water at the foot of wooden platforms from which cross-legged matrons sell fresh fish from age-chipped enamel basins. A beautiful blue glazed ceramic jar, which elsewhere would adorn the terrace of some chi-chi apartment, here acts as a receptacle for scraps of food waste – and nothing much is wasted in  Chinatown. 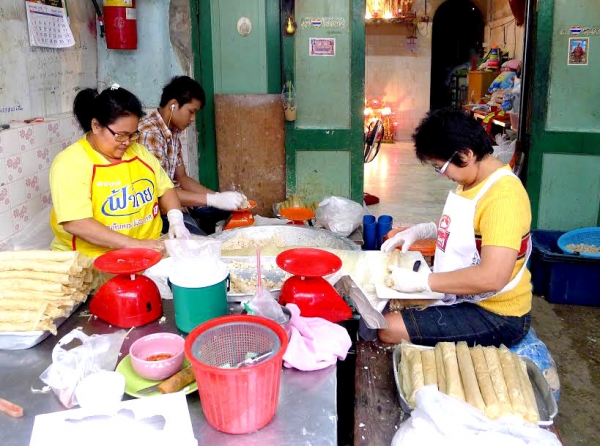 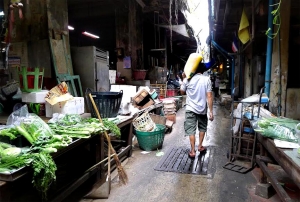 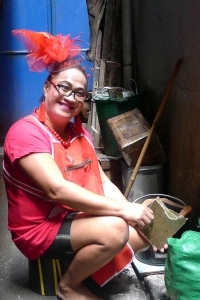 On and on it goes. Fishballs by the tens of thousands and longs sections of meat-filled pastry, hand-rolled with the skill of a Cuban maid rolling a cigar, but in this case, fortunately, not on anyone’s thigh; a trio making tiny pancakes of coconut flour one at a time on an intriguingly ancient contraption, picked out when they have finished their chain-driven cooking cycle by an elegantly dressed young lady and placed five to a pack, priced at 50 baht. Alongside a food stall I watch a mother, daughter and son stripping flesh from crabs, the smallest nippers being picked over by the nimble fingers of the small boy. Everywhere, hanging from beams, bags set on counters and fat sacks on the ground, are plastic bags full of what looks like very large pieces of pork scratching (from some pretty sizeable porkers), but which are actually fish bladders. 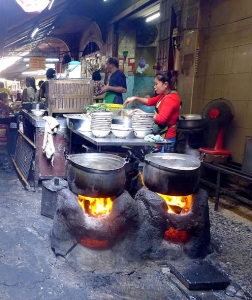 The encrustation of filth is indescribable, and when I put my shoulder bag down to take a photo of dried fish hanging from thin wires I nearly lay it on top of a colony of scurrying cockroaches – and here’s me thinking they were solitary beasts. I watch an inch-long beastie meandering over open bags of fish bladders and wonder if he’ll end up ‘in the soup’.

It’s time to eat, so I join the crowd around an obviously very popular street food stall. Like an auctioneer spotting someone making a bid, or a tic-tac man at a horse race track signaling the starting prices, a man on a stool keeps his beady eye circling the crowd. You take a menu from a box fixed to a pole and make your choice while waiting to catch the man’s eye. When he does he points at you to let you know he’s seen you and calls to a waitress to take your order. Within moments she’s there with her order pad and your number on a piece of paper. From then on it’s just a case of waiting and being fascinated as to how the whole thing operates. Stools don’t get time to cool before someone has cleared the plates and bowls and wiped the table before the tic-tac man waves to the next in line – more a virtual line than a row of people because of the crush – and you step forward. 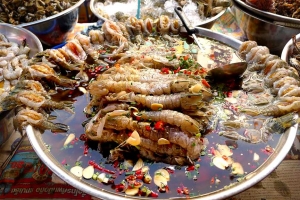 My tilapia, a stout fish eaten by the million in Asia, is superb, with an ultra-spicy chilli sauce that will be hanging around the tongue long past bedtime, but for the moment has my eyes, nose and sweat glands streaming. I’ve no idea what’s in the seafood soup, other than the seafood, obviously, and the lemongrass and coconut milk that is mentioned on the menu. When it’s served I think I can see onions and mushrooms in there and a dangerous level of chopped birds eye chili, but I decide it’s probably best not to look to closely at those bits I don’t recognise.

A few minutes after I begin my meal, a young lady, elegantly dressed and with her make up carefully applied by an experienced hand, sits down at my table and tucks into the same spicy soup as me, a bag of steamed snails and another of grilled prawns, which she devours at a rate I’ve never witnessed before; snails scoured from their shells with a tiny pick, heads of prawns detached and sucked dry almost in the same motion that she peels them. The momentum never stops; I’m completely mesmerised. While she and everyone else who is dining looking as fresh as a daisy, I’m Niagra. I feel the sweat streaming down my neck and beneath my breast bone. She laughs and pulls a handful of serviettes from the plastic holder and hands them to me. I thought I could do spicy.

The competition of staff trying to make themselves heard over the cacophony of tuk-tuks, taxis and motorbikes makes conversation difficult, although as my Thai is limited to sawadeekap, the traditional greeting, I wouldn’t have much to offer in the way of dinner chat. My dining companion pays her bill, gives a hearty blow of her nose and departs as speedily as she arrived, leaving almost all her soup and a half-empty bag of cooling snails. I fleetingly wonder if sitting opposite a red-faced old fogey with sweat streaming down his face, who is constantly bellowing into a handkerchief has put her off her meal. I suspect it would me, if it were the other way around. I try one of the snails. It is disgusting, so I offer the bag to a young German couple on the next stools along. They saw my face when I tasted them, and smilingly decline. 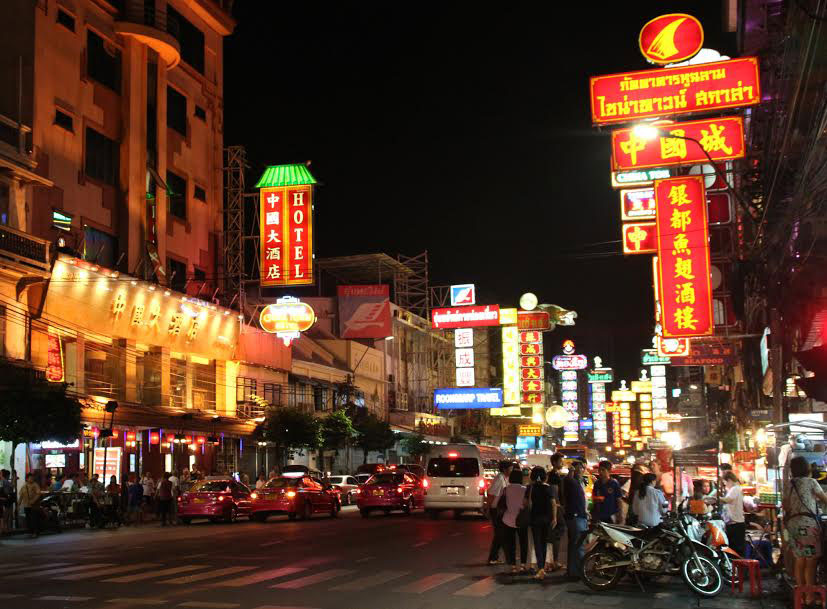 More about markets and streetfood here