Plasencia, the historic capital of Spain’s Extremadura, makes much of the fact that the city has two Cathedrals, one from the XIII century, and one from the XV, named, not surprisingly, la Catedral Vieja and la Catedral Nueva, (the Old and New cathedrals) so they seem the best places to begin my wander around the city. The problem is, I can only find one. 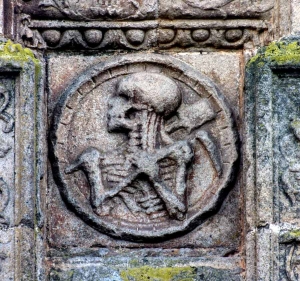 The façade of the Catedral Nueva is stunning in its external decoration, and would be even more so if all the religious statuary hadn’t been removed as a way of saving them from Republican supporters taking pot shots at the Saints during the Civil War. Nonetheless, there is enough allegorical embellishment to satisfy any ecclesiastical historian, and a roundel of the Grim Reaper reminds us that life is transitory, but death isn’t.

But I still can’t find the Catedral Vieja – until I turn a corner and see its ancient door. It’s actually the same building, but all that remains of the older model is the original Gothic façade. Even the new one wasn’t finished, which explains why great stone slabs stick out of the walls like ancient teeth, waiting to be attached to an edifice proclaiming the glory of God – which never came. Still, what there is, is pretty nifty.

The Plaza Mayor is typical of many old Spanish cities, with most of the square surrounded by ancient colonnaded walkways, known as calles partidas, where the first floor extends over the ground floor to create shade from the harsh summer sun and extra living space above street level. The grandest building in the Plaza Mayor is the Ayuntamiento, the town hall, set between two streets whose names are emblematic of Spain,  Calles Sol and Toro – Sun and Bull. The building was begun in 1517 but had major restoration work done in 1755, following the terrible earthquake that destroyed much of Lisbon (Portugal is only a few kilometers to the west of Plasencia.) On its clock tower the Abuelo Mayorga, a bearded chap dressed in Medieval clothing, chimes the himno de la ciudad on a big bronze bell twice a day – at least it does on the days when the ancient mechanisms actually works.

I leave Plasencia heading north, in the direction of Hervás. The drive is on languid roads through thousands of hectares of carassca, holm oak, and occasional fields of equally languid cows. I pass a peaceful half-hour visiting the remains of the Arco de Cáparra, the most ancient Roman ruins in Spain, and all that remains of the once important city of that name. Cáparra was one of the cities on the Via de Plata, an important trade route between the Roman strongholds of Mérida and Zaragoza. Not, as its name might suggest, a silver road, but because name is taken from the Arabic ba la ta, that signifies the road was paved.

Hervás is best known for its Juderia, the Medieval streets that a large Jewish community called home during the XVth century. During the dark days of the Decreto de Expulsión, when King Fernando, la Catolica, ordered the expulsion of the Jews, twenty-five families left Hervás in 1492, fleeing to Portugal, leaving the town depopulated and losing many of the most important skills that kept Spain alive and prosperous.

The Juderiea is full of twisting, cobbled alleyways where you expect to see Mickey Mouse dashing around in his long robe and pointed hat, fresh from his role as the Sorcerer’s Apprentice. Many of the houses have an early form of corrugated weatherproofing; concave tiles normally found on roofs are fixed to the walls, giving a sinuous rippling effect.

Winding my way up the steep cobbled streets to the Iglesia de Santa María, a pretty little church made even more attractive by its simplicity, (and I’m amused and highly pleased to see signs taped permanently in place on the first front four rows announcing that they are ‘Reservado por niños y ninas’ reserved for boys and girls). I sit quietly for a while, appreciating a silence undisturbed by anything except the occasional movement of a verger, checking over some of the statues used in the Semana Santa parade. We chat for a while, and he tells me that the retablo that forms the main altar was once in a side chapel dedicated to the Virgen las Angustias, but was removed and hidden away during the Civil War to protect it from marauding Republicans who sacked many of the churches in Spain and are responsible for the loss of enormous amounts of irreplaceable religious art.

I’m shown a rare effigy of the Christ figure, dating from the 16th century, laid in a glass case with arms crossed over His chest. The verger points out the arm sockets, covered by a folding piece of fabric, and explains that this was to allow the arms to be moved to place the figure on the cross with arms extended when it was carried through the town during the Semana Santa processions.

I take a stroll around the church walls, which follow the original shape of the castle. Off in the distance I can see a weird building sat on the hillside that looks like a collection of yurts, with domed roofs and sinuous scooped points like a Chinese hat. It’s the Museo de Motos y Coches Clasicos, the brainchild of one Juan Gil Moreno. 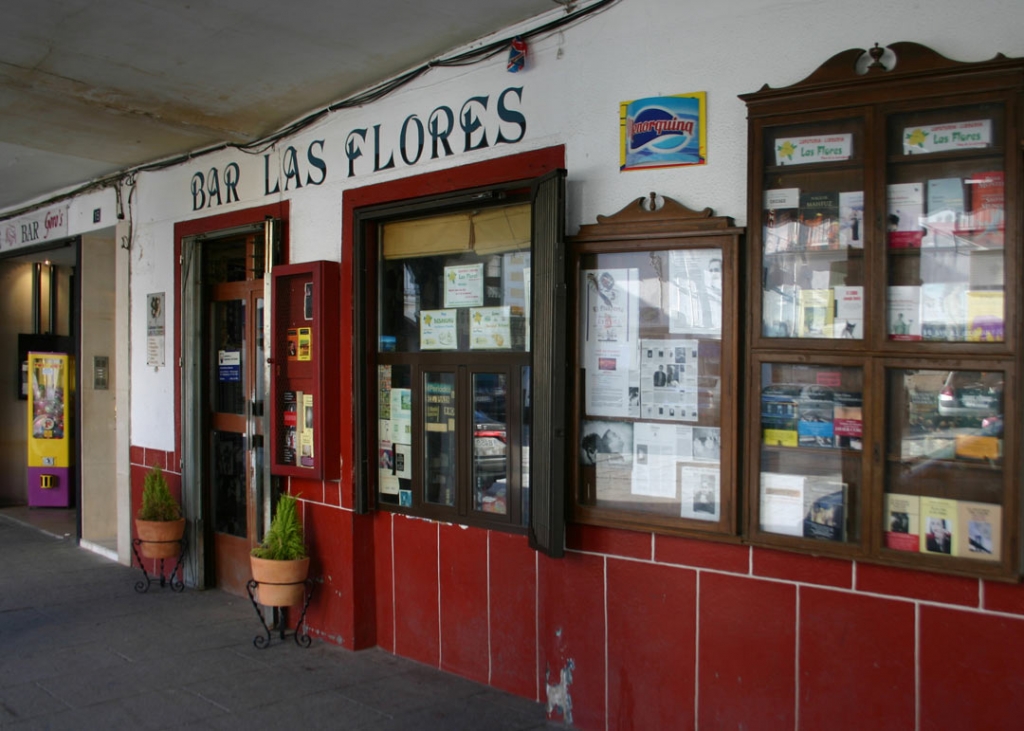 With the greatest respect to the tourist authorities of Hervás, my two favourite places in the town receive no publicity – and they jolly well should! One is the Café Las Flores on the Plaza Mayor, a dimly lit mixture of café, bookshop, newsagent and reading room. The new books are kept in bookcases with chicken wire fronts – ask and they’ll be take out for you to peruse and, hopefully, buy. In the dungeon-like atmosphere at the back of the café are hundreds of dog-eared magazines and battered books to while away a coffee and tostada – which is what I do. The owner shows his age by the Crosby, Stills, Nash and Young music, but at least it’s better than the blaring racket normally found in Spanish bars – and there’s no TV with football blasting out, either! 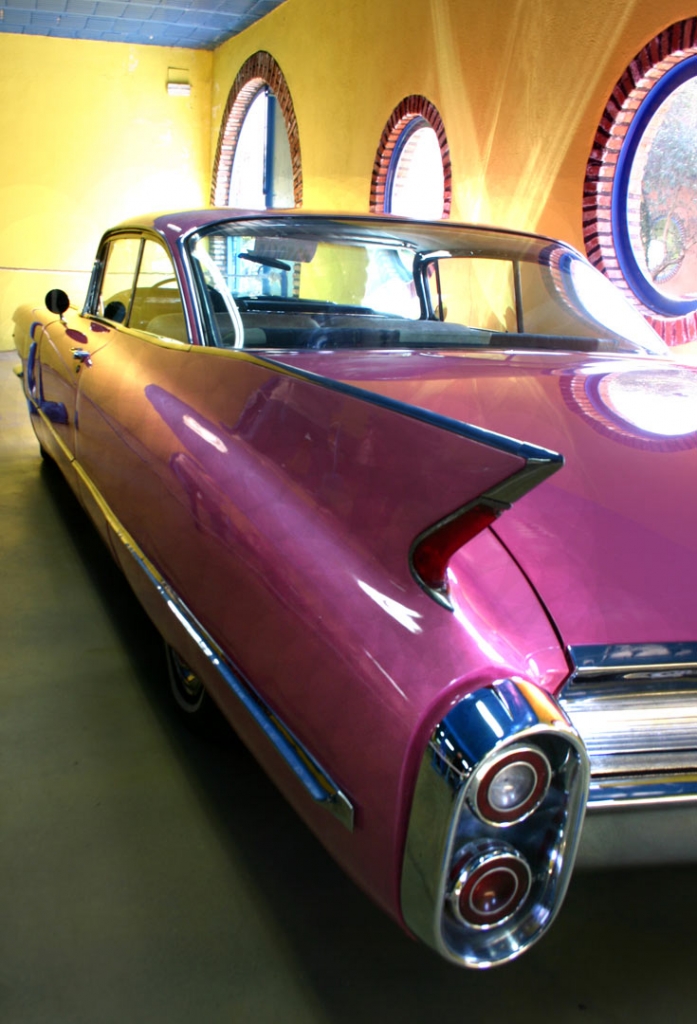 The other is Sr. Moreno’s museum, a fantastical collection of motorbikes, cars, funeral carriages and prams – the biggest of its kind in Spain. Fewer obsessions come more expensive than this, and if the collection itself wasn’t enough, the cost of building the nine pavilions in which it is housed must have been enormous. I wander around in a daze, salivating over gleaming paintwork and polished aluminium, as pristine as if it had just come out of the showroom. A Harley-Davidson from 1929, with a hand-operated gear shift, double headlamps and big frying pan-shaped leather seat; the beautiful 1940’s British BSA (known as the ‘Beezer’), with its bullet-nosed side-car, as sparkling as the day it came of the production line; the glorious pink Cadillac from the 1960’s that seems to go on forever, with rear fins you could spike a kebab on – they may have been gas guzzlers, but boy, did they have style!

Dreaming of a misspent youth, racing around country roads on a Honda Goldwing the size of a small saloon car – I never did – I wander back to the car park and my sedate hire car. Ah well! we can all dream. 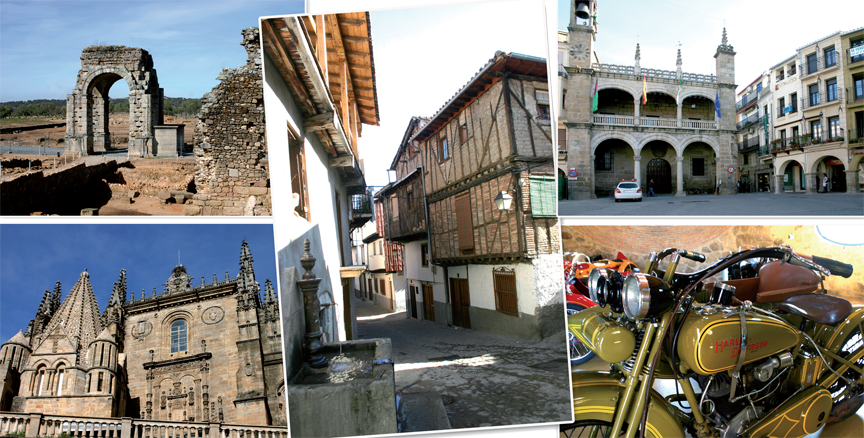 Read about the delicious cherries of Extremadura