On the day of my planned walk down Istiklal Avenue the sky is a photographers’ worst nightmare, heavy grey, glowering cloud that blocks any semblance of sunlight to give even the slightest definition. As it’s my last full day in Istanbul I don’t have a lot of choice so hope that by the time I get there the weather will have improved. (It didn’t.)

As I leave the Metro station at Taksim Square to begin my walk downhill to Karaköy, the port area at the mouth of the Golden Horn on the European side of the Bosphorus, I ask directions to the Avenue from the occupants of the small Municipal Tourist Team car that wanders Taksim Square. I unexpectedly become a photo opportunity, as one of the two uniformed staff takes an image on her iphone of the other directing the lost pensioner, pointing, big smile. I’m sure they could have found a better subject. 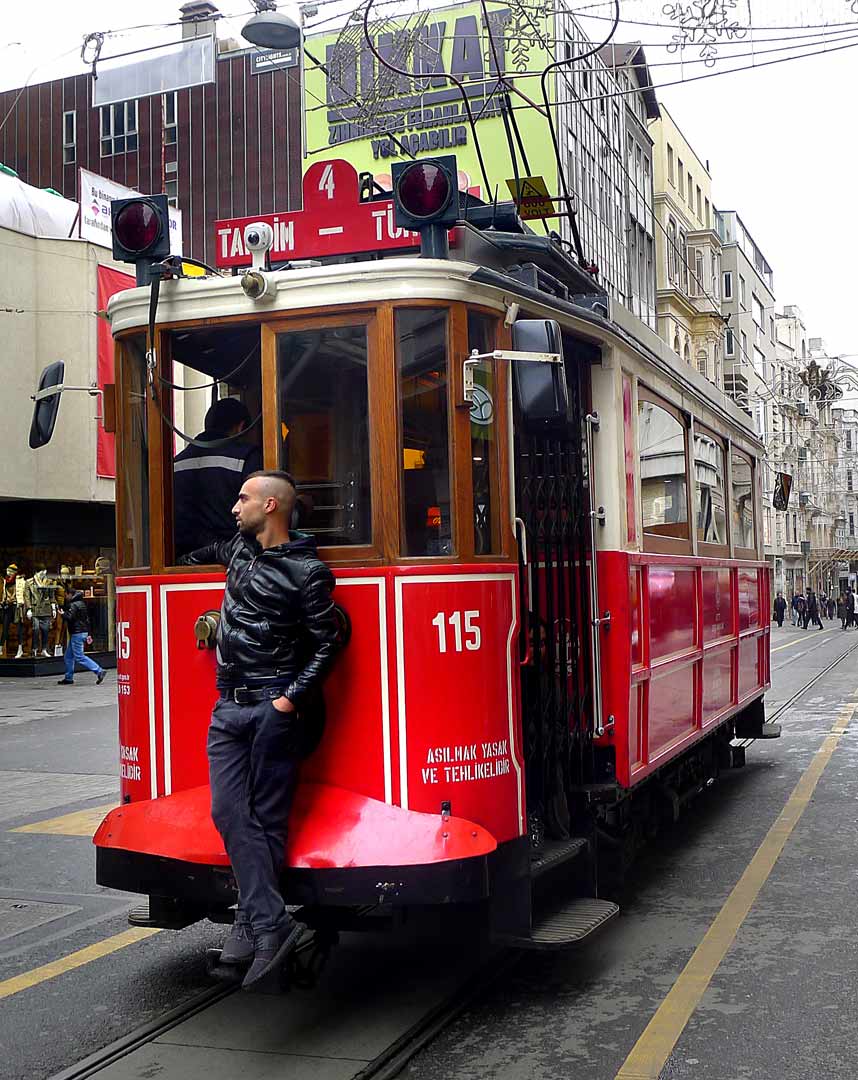 Taksim Square is considered the heart of modern Istanbul, amongst other things the site of the Republic Monument, a highly symbolic spot for many. Within its cupola it is a statue of Mustafa Kemal Atatürk, the founder of the Turkish Republic. It was once the point where the main water lines from the north of Istanbul were connected and branched off to other parts of the city, hence the name, which means ‘division’ or ‘distribution’. From its junction with Istiklal, a tram redolent of the Edwardian era makes its descent of the 1.4 kilometre avenue, ending near the Tünel, built in 1875, the world’s second-oldest subway line after London’s Underground (1863).

The Paris of the East

İstiklal Caddesi (Independence Avenue) more commonly known as Istiklal Avenue, is promoted by the Tourism Office as the 5th Avenue of Istanbul, although a comparison with New York’s most famous and wealthiest thoroughfare is tongue-in-cheek to say the least.  But as it’s estimated that one million people stroll this elegant pedestrian street each day at weekends, enjoying the beauty of its glorious architecture, a mix of Neo-Classical, Renaissance Revival, Beaux-Arts, Art Nouveau and a smattering of Art Deco, delving into boutiques, bookstores, art galleries, cinemas, theatres, cafés, historical patisseries, chocolaterias, restaurants et al, it’s fair to say that the avenue does have a certain panache as it descends gracefully in both style and incline to the medieval Genoese neighbourhood around Galata Tower. 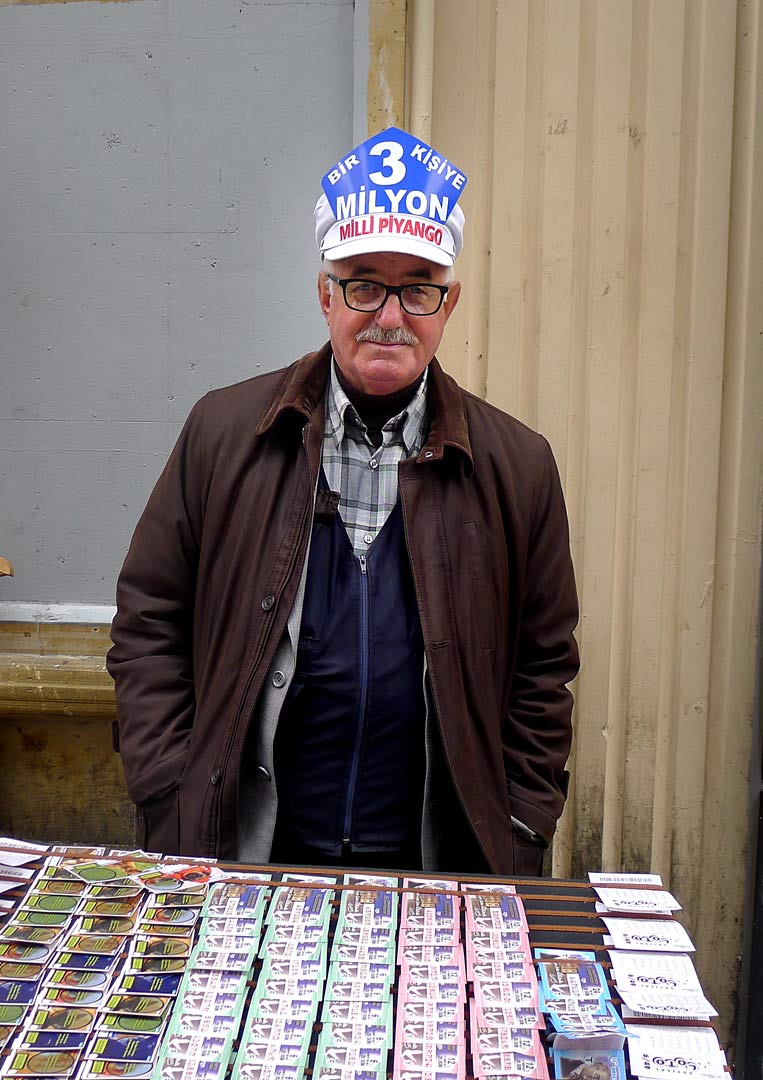 When 19th-century travellers referred to Constantinople (today, Istanbul) as the Paris of the East, they were usually referring to the Grande Rue de Péra, an Ottoman era name for Istiklal Caddesi, with its blend of Europe and and Asian cultures; a popular spot for Ottoman intellectuals, European and the local Italian and French Levantines. The avenue briefly fell from favour in the 1970s and 1980s, leaving little more other than in the bars and bordellos of its side streets. Fortunately, during the late 1980s and early 1990s, a massive restoration took place, bringing the Grand Avenue (yet another previous name) back to its former glory.

As I begin my stroll the vintage tram that runs from Taksim Square to the port begins its downhill run, only to be stopped by a convoy of vehicles transporting police to Taksim Square to celebrate Republic Day, a national holiday that commemorates the events of 29 October 1923, when Kemal Atatürk declared that Turkey was henceforth a republic. The ‘day’ lasts 35 hours, starting each year at 1:00 pm on 28 October. The convoy pulls onto pavements to let the tram pass and the short stop allows a young man to jump onto the back for a free ride. 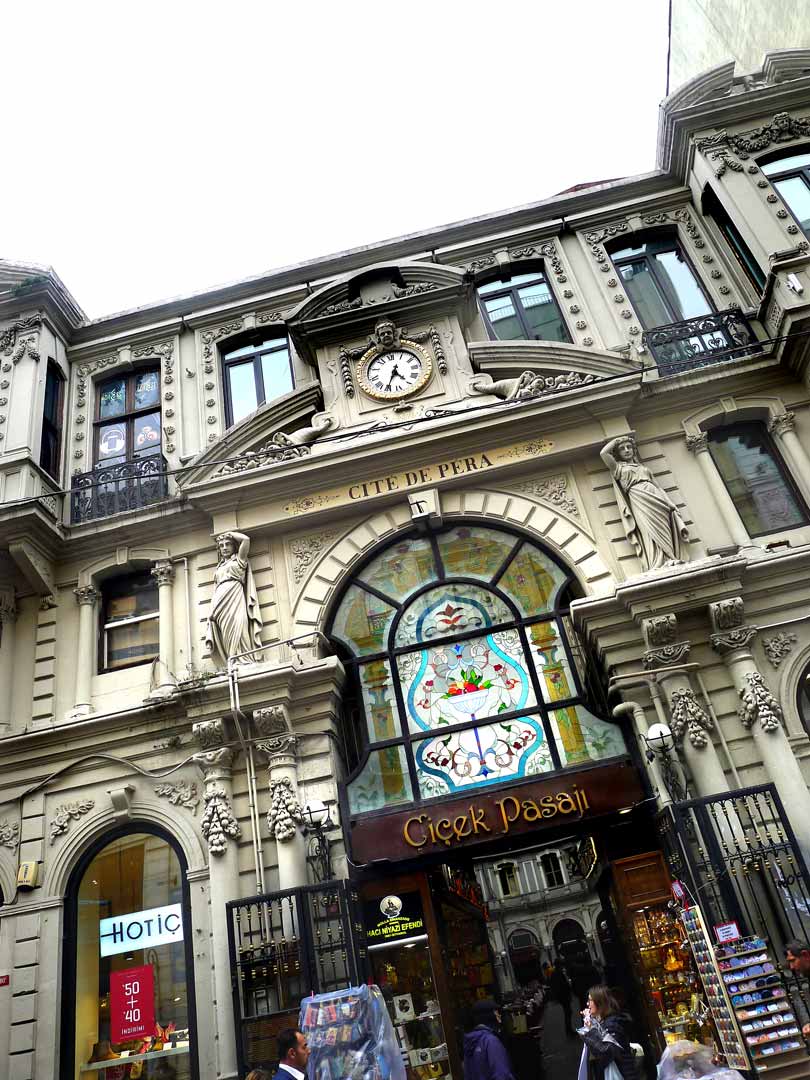 Citè de Pera Arcade is one of the famous historic galleria on the Avenue, connecting it with with Sahne Street. Opened in 1876, it’s a covered arcade in the Belle Epoch style with rows of historic cafes, winehouses and restaurants. Following the Russian Revolution of 1917, many impoverished Russian noblewomen, including a Baroness, sold flowers here and by the 1940s the building was mostly occupied by flower shops, hence the Turkish name Çiçek Pasaji – Flower Passage.

In 1940 Yorgo’nun Meyhanesi (Yorgo’s Winehouse) was the first winehouse to be opened in the passage followed by more rough establishments that led to the gradual disappearance of the flower sellers during the 1950s, it’s elegant shops giving way to rough meyhanes, traditional bars that served wine, raki, vodka and beer with meze and traditional food. In the late 1970s parts of the building collapsed and during reconstruction a glass roof was built to cover the galleria to protect pedestrians and diners from bad weather. The passage still has style and charm, although now it’s mainly a tourist trap selling mediocre food. 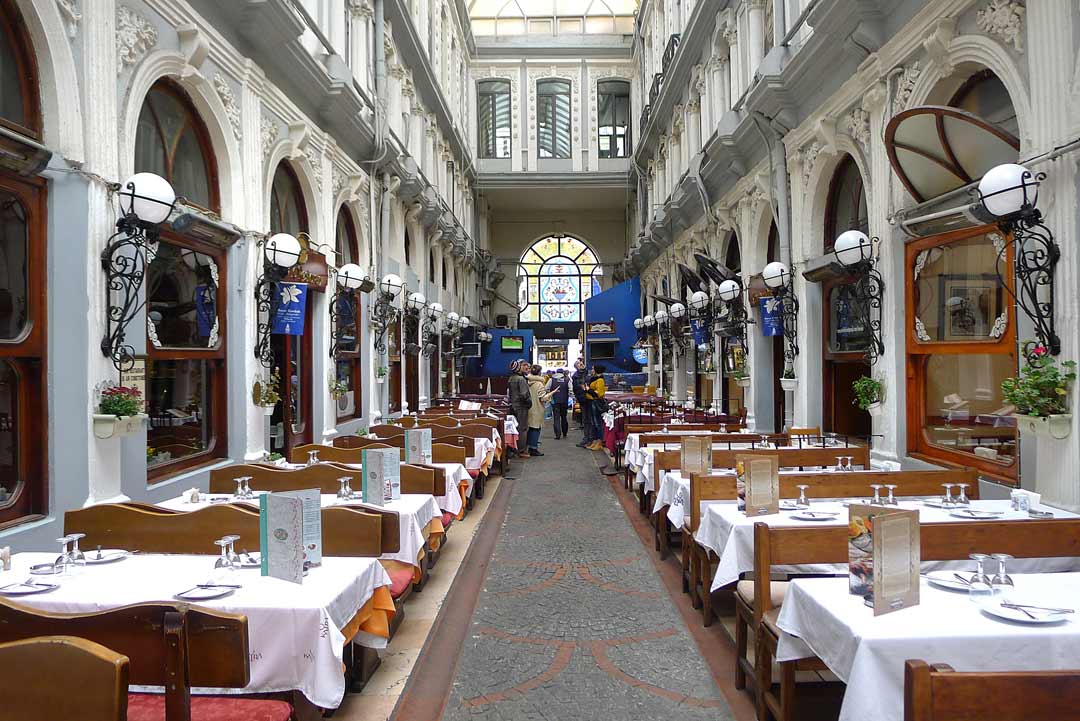 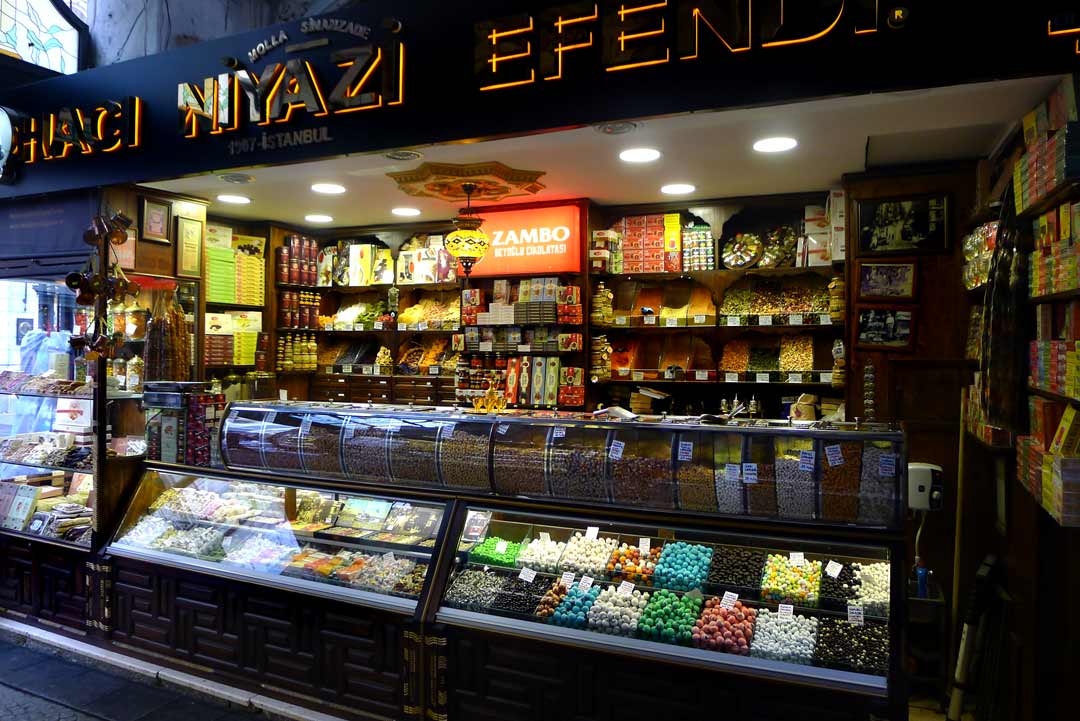 At the entrance to the arcade the elegant shop of Haci Niyazi Efendi displays nuts, curious chocolate mushrooms, herbs, spices, packets of tea and Turkish delight in a choice of flavours, in the same elegant display cases used since its opening in 1907.

At 172a, Markiz Yemek Kulube (Yemek Kulubu literally translates to ‘food club’) is another reminder of the Belle Epoque. Fast food served so quickly I’ve barely given my order before it’s on the table. An excellent chicken curry with mushrooms and cream, with both chips and rice, a throwback to my first Indian restaurant of my youth in Newcastle-upon-Tyne in the north of England. An excellent menu at prices surprising for the posh end of town and with a décor far more delightful than the usual restaurants of this price range. 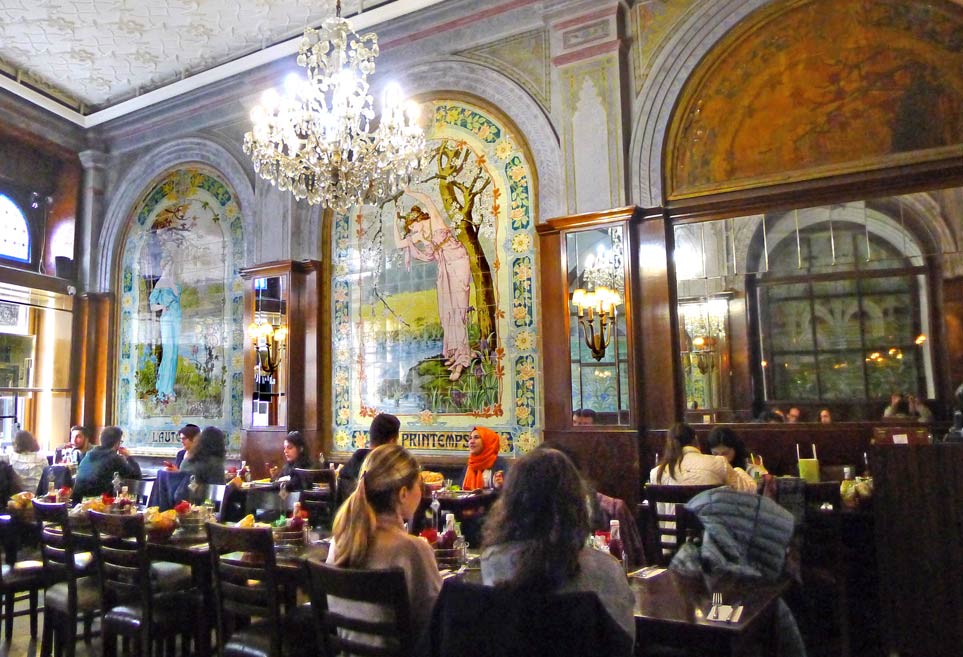 At a sharp bend in the tram line I continue straight ahead down the cobbles in the direction of the Galata Tower, its photographic appeal blocked by a van delivering crates of oranges, pomegranate and pineapples to a fresh juice stall.

It’s a pretty, colourful street that must be delightful on a bright summer’s day but even under a dark, glowering sky it’s still a pleasant stroll, free from the press of humanity found around the Spice and Grand Bazaars.

The basic neccessites of life

I drop down to the river through the back streets of Kerakin through a wonderland of shops brimming over with tools, cables, key cutting machines and all things plumbing related. It’s not the products themselves that intrigue me, it’s the sheer volume of knobs, drills, springs, twisted thingamibobs and curved whatsits that mans’ ingenuity has created to service his most basic necessities, washing and defecating, and making these functions as comfortable and attractive as possible.

By seven it’s dark and the wind off the Bosphorus is biting, but it doesn’t deter the fishermen on Galata Bridge, who seem even more packed than during the day. I struggle to get a photo of the night-lit Topkapi Palace Musem perched above the floating fish restaurants on the quayside, eventually accepting that I’ll need the wonders of Photoshop to remove the rods and filament fishing lines that cross my lens. 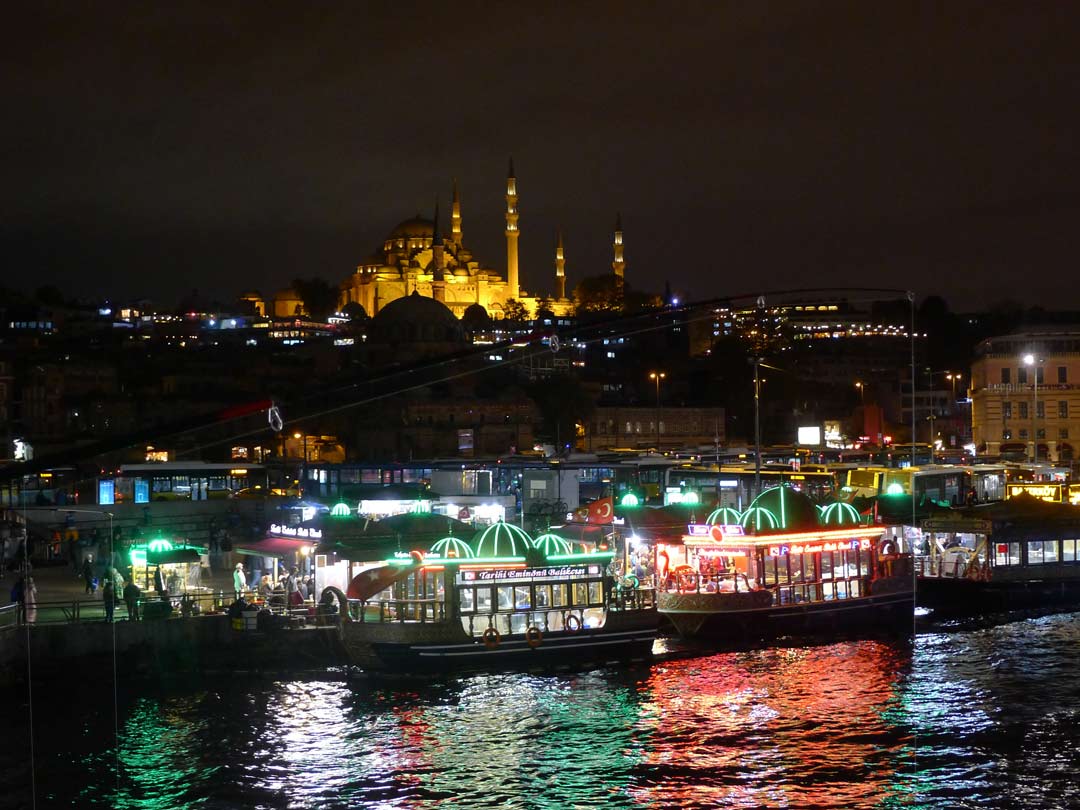 More about a wonderful museum in Istanbul