In Spain, Sunday is still the day when families get together, take a stroll, have lunch. Fortunately the  beach is the ideal place.

It was a morning akin to high summer in England, clear blue skies, just a shade whiter than they will be in summer, but not disturbed by a single cloud. It’s on days like this that I treat myself to a bike ride through the huerta, Valencia’s market gardens and allotments, to the beach at Alboraya, to the North of the city.

Usually the beach is a narrow stretch of almost empty sand, most beach babes preferring Malvarrosa, where they can park and drag their tables, chairs, bags and baskets and spread out under big, brightly coloured parasols. Here at Alboraya, the beach is mainly used by fishermen, who balance their rods on poles planted in the sand and pass the time lounging in picnic chairs. 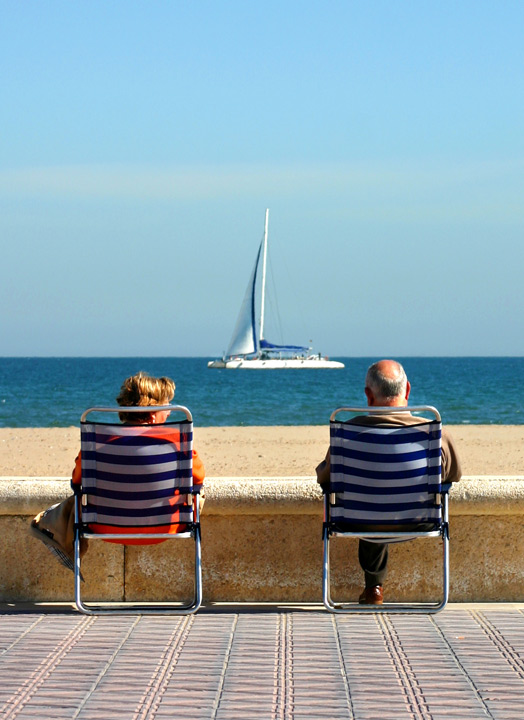 For a few weeks during winter the beach loses its tailored look when storms bring seaweed ashore and drop it as a barrier between sand and sea. This year has been relatively devoid of bad weather, but this hasn’t stopped the Med dropping its detritus on Valencia’s beaches, part of its seven year cleansing cycle.

In some ways, even though the beach isn’t exactly beautiful to look at, winter is a good time to go, especially on a day like today, because there is almost no-one else around. I sit on a rock warmed by the sun and simply watch the coming and going of the sea, the sailboats in the distance drifting across the horizon, and the squawking seagulls ducking and diving.

But to be honest, sea, boats and seagulls can only keep me entertained for so long, so I make my way home, as usual, by the prom that runs for two kilometres along the beach at Malvarrosa to the Port, and which normally provides plenty of entertainment as I watch the Spanish enjoying their Sunday at the beach.

Just as I’m leaving Alboraya along a dirt track that runs parallel with the beach, I see a chap taking advantage of the day. I may have gone to the lengths of taking my jacket off to feel the warmth of the sun as I sat on my rock, (I’m a martyr to bronchitis and only divest if it’s steaming hot), but he’s gone the whole hog and is down to his black swimming trunks. He simply stands, staring out to sea, occasionally scratching his chest, lost to the world. 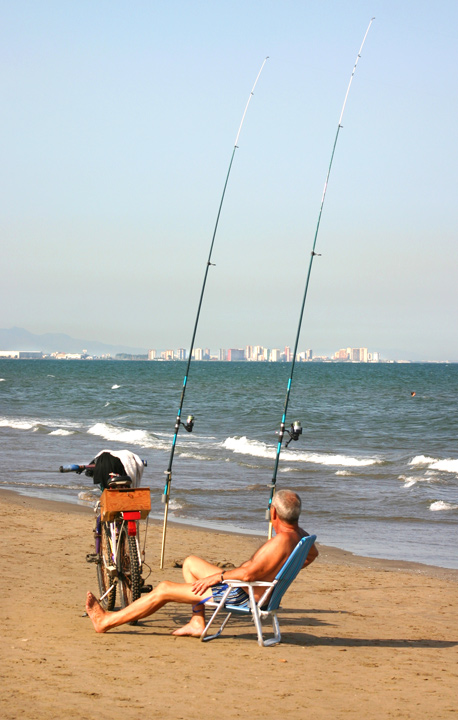 Just before you drop onto the prom at the top end of Malvarrosa there are a couple of restaurants which are always busy on Sundays, their tables spilling out onto their terrace (ie the pavement in front of their premises). Things are no different today, and diners had the additional pleasure of being serenaded by a solo electric guitarist, his backing group coming from an iPod connected to a small amplifier on a trolley. Unusually, he was pretty good, and as I pass I realise that he is playing a mellowed-out version of I ain’t got nobody, which could equally have referred to his backing group as to his situation in life.

I stop to listen for a while, but know it’s time to move on when he segues into My Way (En Mi Manera in Spanish), the only song banned on BBC’s longest established radio show, Desert Island Discs. Just as I climb onto my bike a young man on a mono-cycle casually rides by me, watching what’s going on on the beach. “Now, you don’t see that on Calle Colon,” I think, imagining him pedalling along Valencia’s up-market shopping street.

As I turn the corner onto the promI see a couple coming toward me, sauntering slowly in the sun, she pushing a pram and he, who has obviously just bought a yo-yo from one of the Senegalese ‘blanket’ salesmen that line the lower reaches of the prom, is trying to get the yellow discs to work their way back up the string. Even if he was the bees-knees as a yo-yo-er in his childhood, he’s obviously way out of practise because no matter what wrist action he uses the yo-yo refuses to make the return journey up the string. 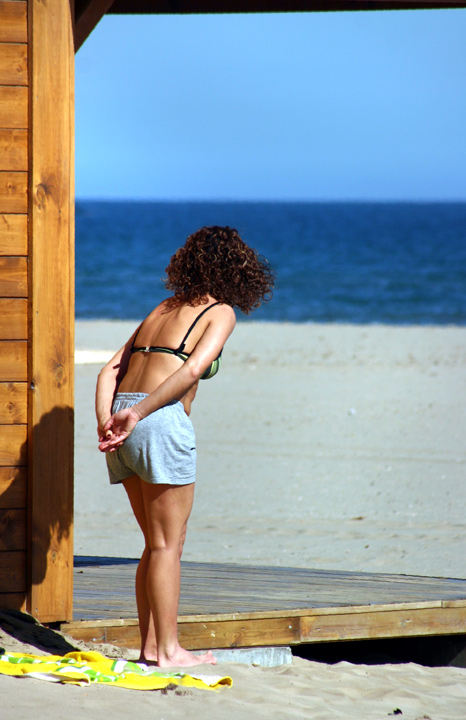 It’s  the day of Los Reyes Magos, the coming of the Three Kings, and a more important day of gift-giving in Spain than Christmas, because loads of the kids are playing with their new toys; staccato sounds of wheels on pavement as six-year-olds trying to master the intricacies of in-line skates, the buzzing of radio controlled cars whose drivers haven’t quite got the hang of which button to push and are replicating the driving skills of many of their parents. (Spain has the worst driving record in Europe, beating even the Italians, which surely says something not good.)

I’m totally tickled pink by a young madam of about seven, peacefully promenading with her little white doggy at her side, as sedate as any elegant lady exercising her pet. The dog’s short legs nip back and forth to keep pace with m’lady’s, but what sets me giggling is that the dog’s legs are on wheels, and the pretty purple leash that leads from the small hand of its owner to a bright red dog collar is the cable that controls it. I can’t help but think how lucky she is that she doesn’t have to carry a plastic bag to pick up the dog shit that was, until a recent law was enacted that forced dog owners to collect their animal’s feces, the bane of pedestrians trying to take a stroll around the city. 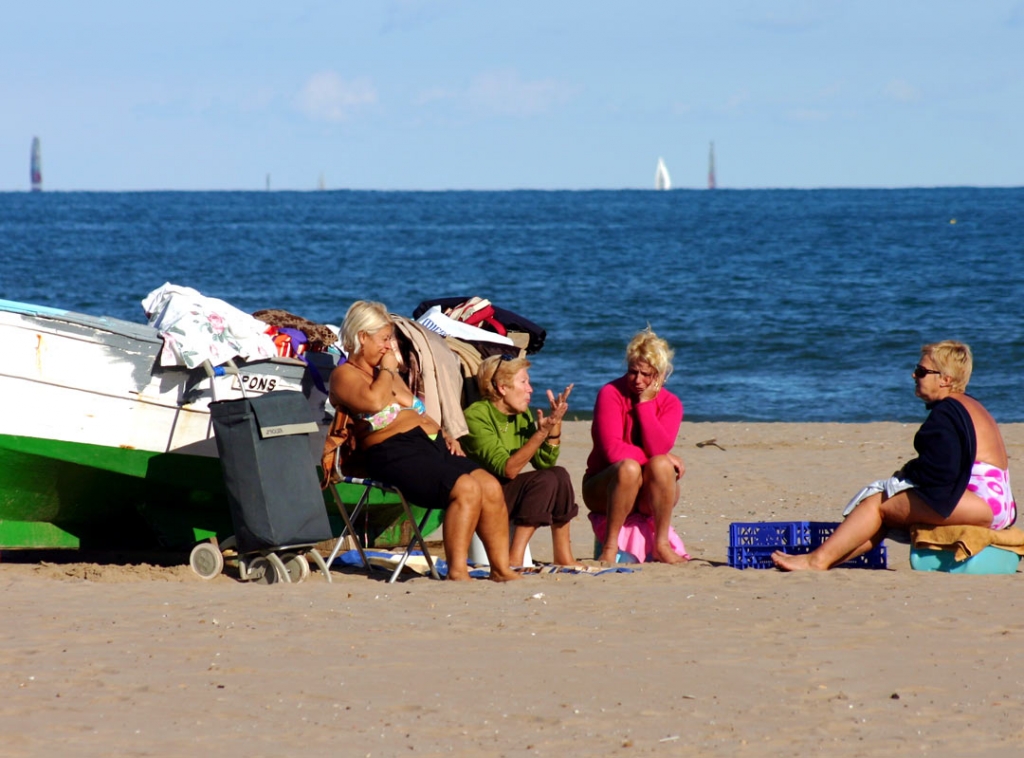 You can see more photos of Valencia at Eye on Valencia