The only thing worse than going uphill on a camel is going downhill, or at least it is if you don’t count the getting on and off, or the camel standing up to begin your trek, which pales into nothing the first time the animal drops on its front knees for you to dismount. And there’s the bit in the middle, the lumpen swaying as the beast plods along, following the curve of the dunes in its meandering route, where your legs begin to ache because there are no stirrups 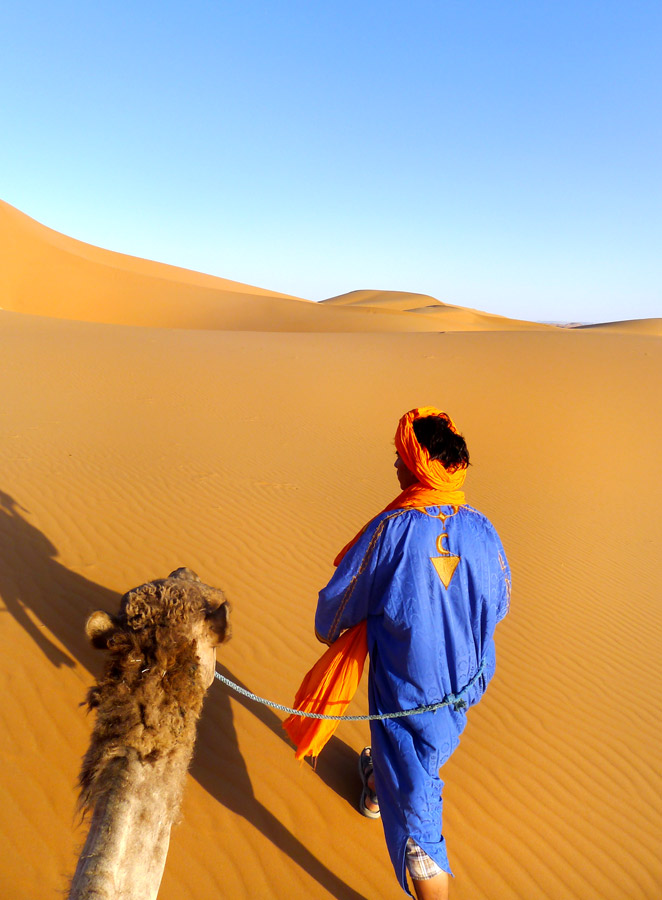 to put your feet in to give you a modicum of support and at least a faint shade of elegance. Come to think of it, there’s little to recommend a camel ride, so it’s no surprise that most of the guides you talk to prefer to walk. I bet Peter O’Toole had a stunt double when it came to humping along on a dromedary during the filming of Lawrence of Arabia.

I discover that I’m at the head of the caravan not because I have the air of a desert adventurer but because the nameless camel I’ve been allocated doesn’t like to be behind another and nips at the bums of any in front of him. I thought its grumpy character was just the normal nature of the species, but it seems that all God’s chillun’ got their own peculiar ways.

As our long shadows walk alongside us I reflect that as humpy, lumpy and grumpy a camel might be, it has a romanticism that isn’t inherent in a 4×4. If I’m going to spend a night under the stars I’d rather do it properly and put up with the temporary discomfort of an authentic ride on an animal that has all the appearance and angularity of something that has been designed by a committee – a committee that originally set out to design a horse but got rather lost along the way.