For Pepe Cano, President of the Benidorm Association of Columbiculture the skill of the palomos, the painted pigeons, is much like that of the footballer. ‘They each have their different tricks and techniques when they are dealing with their opponents,’ he says, ‘and you can see the way some of the better ones, those who will go on to become champions, watch what the others are doing and adapt their game accordingly. It’s like raising children; you feed them and look after them, and as you watch them take their first flights you see which are the strongest, the ones which will be entered for competitions.’ 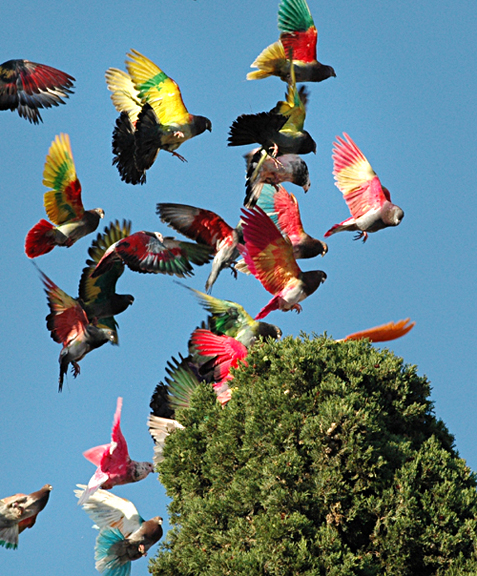 When the Arabs settled Spain in 711 they brought with them a culture that was to permeate almost the whole of the Iberian peninsula. Their language, their food, their arts are recognisable in every aspect of Spanish life. They also brought with them the pigeon.

The prime importance of the palomo was economic, it was valued for its meat, its plumage and for providing palomina, a high quality natural fertiliser. Documents dating from 1268 tell of a vast population of pigeons living in the ninety-seven towers of the city of Murcia and in the surrounding countryside. The people of the city had taken the bird to their hearts and specially bred pigeons, often the descendants of those left behind when the Arabs were expelled or fled, were trained by professional colombaires. Two hundred years later there was so much palomino, basically bird manure, building up on the bridge above the River Seguram that travellers and tradesmen were unable to cross.

In 1773 the first pigeon sports club was started in Murcia, but it wasn’t until more than two hundred years later, in 1994, that pigeon breeding was finally officially recognised as a national sport, when the Federacion Española de Columbicultura was set up. The sport, official or otherwise, almost disappeared altogether when, in 1932, the Minister of War issued a decree banning it because of the threat of the birds being used to carry secret messages. Only after arduous negotiations was the decree repealed, when the Ministry of War finally conceded that the sport was of national importance, uniting many of the poorer rural communities

Training begins when the male pigeon reaches sexual maturity at three months. First he will fly individually with a female, learning to recognise the scent that will later be his sonar on his route to possible championship status. After a few flights he is joined by other male trainees and begins to learn the courtship routines necessary for success in competitions to come. Eventually, the best of the flock are selected to take part in the first level of competitions, the comarca, which lead finally to the Spanish championships – at least for the best of them. 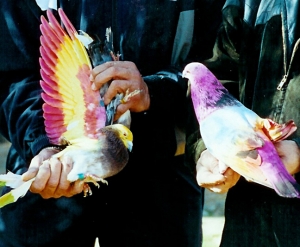 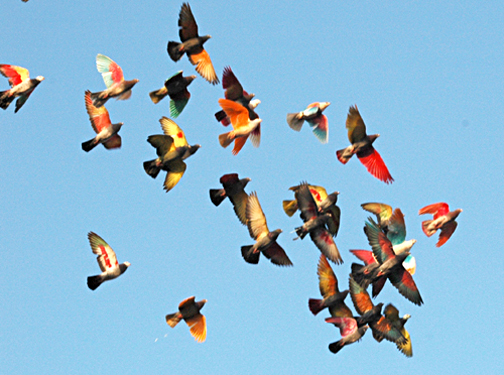 The competition takes place around a tree – no particular tree, but preferably one with quite dense foliage where the female can hide when she needs a rest, although a particularly clever male can make extra points by finding her and settling down to a bit of private billing and cooing while his rivals tire themselves out flapping around elsewhere. It takes place over six consecutive days and points are awarded for the time the male stays in the air with the female and for time spent in the courtship routine on the ground. Extra points can be gained for the elegance of his flight and courtliness of his attentions to the lady.

As the time of the competition approaches, a rocket is set off to alert the owners and trainers, who release their birds from gardens, patios and balconies all around the town. Slowly they congregate in their wheeling flight until the referee decides the moment has arrived to release the female. Instantly she is pursued by the gaudy conquistadores and for the next two and a half hours she will try to confuse them to avoid their amorous intentions.

As fatigue and hunger override lust, pigeons will begin to retire from the chase, until only a hardy few will be left at the end of the allotted time. Their individual points will be added to their running total for the six days and the winner will go on to the next stage of the competition. As might be expected, the winning male is applauded for his stamina while the female gets scant recognition of the fact that she has had to clock up an equal amount of air-time, without which there would be no competition in the first place. But there again – she is a professional!

There is no official record of when painted pigeons began first appeared, but with up to eighty birds in the air simultaneously the referees would be hard pushed to identify which one was closest to the female if the birds didn’t wear their distinctive markings. Reds, blues, greens and yellows fill the sky in the ‘torneo amoroso’, where the rapid dodging and weaving, unforeseen exits from the sanctuary of the tree, and mass close-up adoration make for a kaleidoscopic flurry of feathers.

Every club member has his own colour scheme but might have a number of painted pigeons wearing his house livery, each identifiable by an individual mark. The referee needs a phenomenal memory and pair of eyes to keep track of the action, but most of them have been involved in the sport since childhood and will have attended one of the many courses put on to educate children in the care of their birds.

As in horse breeding, the guadily painted pigeons carry names that identify them with their lineage and are instantly recognised by aficionados. The parents of Chulo de Abajo (The Ruffian From Downstairs) obviously sired a youngster with a temperament for waywardness, and the owner of En el Nombre del Padre would seem to be looking for a bit of divine intervention. Ida y Vuelta (Go and Return) at least seems to have a likelihood of getting back to its home in Seville if it should go astray, and whilst Violento, Rasputin and Renegado might well be named to strike fear into the hearts of their opponents, Desequilibrio (Unbalanced), would suggest a bird with mental instability or a difficulty with getting into the air in the first place.

During the course of the competition, garbled voices crackling from walkie-talkies exchange information as to the whereabouts of pigeons that have wandered off from the main performance. With a national champion worth anything up to £20,000, security is high, and many of the most famous paintd pigeons will have chips implanted in their legs so that they can be located if they go astray. The club in Murcia recently bought a micro-lite aircraft to monitor birds during competition, and Benidorm even went to the lengths of hiring a helicopter for the international championships held there in 1997.

‘For me, the sport has everything,’ comments Pepe, ‘You train the birds and get excited when you see them doing well in a competition. During the competition itself you have moments of intense activity but also of peacefulness. It’s beautiful to see the whole brightly coloured flock flying gracefully through the sky.’ 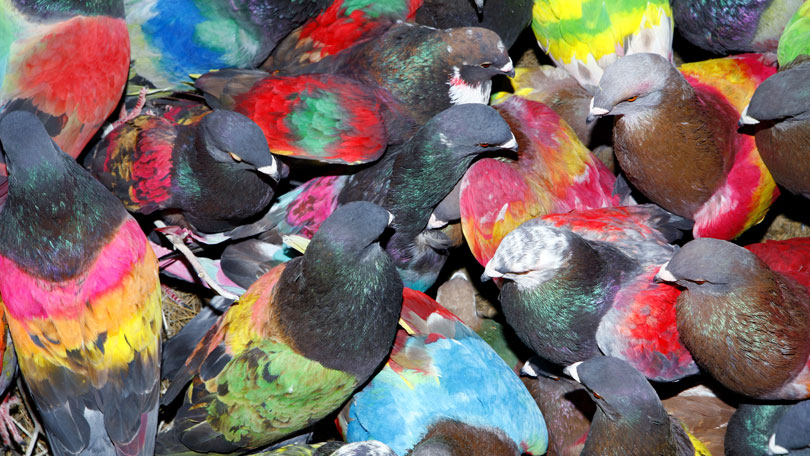