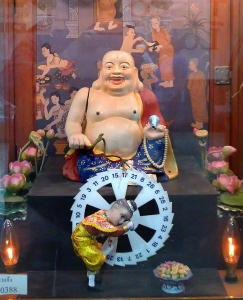 I’ve only experienced a couple of genuine seers in my life but a chance encounter with a couple of mechanical ones at Tesco Lotus in Bangkok’s Chinatown took me back to the clanking and whirring of fairground automatons of my childhood.

Encased in elegant wooden and glass cases two characters presented themselves. On my left a fat Chinese ‘Happy’ Buddha with an ear-to-ear grin held a stick that appeared to be raised in preparation for striking a young boy dressed in bright yellow silk pantaloons who toiled at a notched numbered wheel between  them. On my right a ancient, haggard-looking indigent with a pained, constipation-like grimace stood over another young boy, this one squatting yoga-like with a beatific smile on his countenance.

With the ancient a series of spinning, flashing lights flicker like the multi-coloured strobes of a fairground ride. When the flickering stops, the last number illuminated is and your prediction for that day and is printed on a slip of paper that you take from a series of slots in the case below. I opted for the Happy Buddha, working on the premise that his jolly smile might elicit a more cheerful prediction than the dour indigent’s.

I drop my coin in the smiling Buddha’s machine, he raises the branch in his right hand while the young boy turns the wheel. Around the small chap goes, bending double with the mechanical effort, until the Buddha drops his branch as if to beat him to speed up the process. But the stick lodges in a notch on the wheel, stopping its turning at number 17, my fortune for the day. I take a slip from the requisite slot, although the text is all in Thai so I need to get it translated.

The Victorian charm of the machine is such a delight that I’m tempted to put more coins in just to watch the action, but I don’t want to offend the gods by saying I don’t believe them so I make do with whatever number seventeen has in store for me.

When I get back to my hotel I ask the delightful receptionist, Lekky, if she can translate my reading. She freely admits that it’s such archaic gobbledygook that it’s barely understandable in Thai, but puts it through google translate to see what comes out – basically, gobbledygook in any language:

I do work provoked opaque House. Will become malignant homophobia. Do not be impatient to imagine any deliberate I dig the notion gradually Mei Meng. Maintains that the call is gay.

So we must be careful preparation. He had but we all concision. Turned to look at the wound, but a diversion. People ask me how I feel comfortable. Or involve matters that are asked.

I do not doubt all win I doubt very thick receivables The friends I have not met the eye. But Fortune’s love will be there.

It’s never occurred to me that I might be in even the slightest way either homophobic or gay, but perhaps the Buddha knows more than I do and I’ve been tucked in the closet without me realising it. Still, it’s nice to know that ‘Fortune’s love will be there.’ It certainly hasn’t been around much in the past!