It’s 8.30 on a March morning and in Penang it’s already beginning to turn warm. The street market of Jalan Kuala Kangsar that spills out from Chowrasta Market is in full swing. I watch a lady in blue headband as she ladles noodles into a boiler, where they sit for a few seconds in a mesh scoop before she drains them, drops them into a bowl and throws on an assortment of bits and pieces, the dish is on its way in about thirty seconds. But it’s a bit early for breakfast and while I’m finally used to spicy pork and rice in the early hours after living in Chiang Mai, Thailand, for three years, I still yearn for the days of a good old English fry-up to get the morning juices going.

Despite being in Chinatown, the site where  Kuala Kangsar and Chowrasta Market squats, stretching along Kuala Kangsar Street between Campbell and Kimberley Streets, was originally part of a large Indian enclave, mainly ethnic Tamils from southern India who began settling around the area in the mid-19th century. In past times Jalan Kuala Kangsar was also known as Jalan Bangsawan in Malay, taking its nickname from troupes of artists who would perform Bangsawan on the streets, a type of opera that originated on Penang Island towards the end of the 1800s. In Cantonese the road was called Ma Lai Huan Kai, the Street of Malay Theatre. 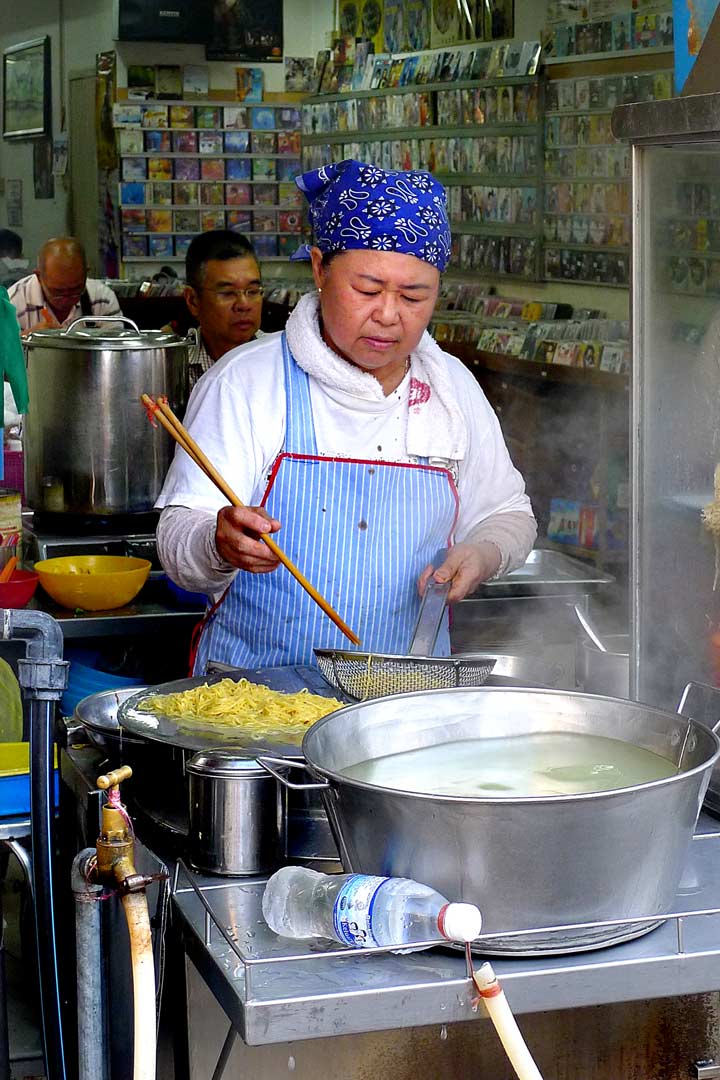 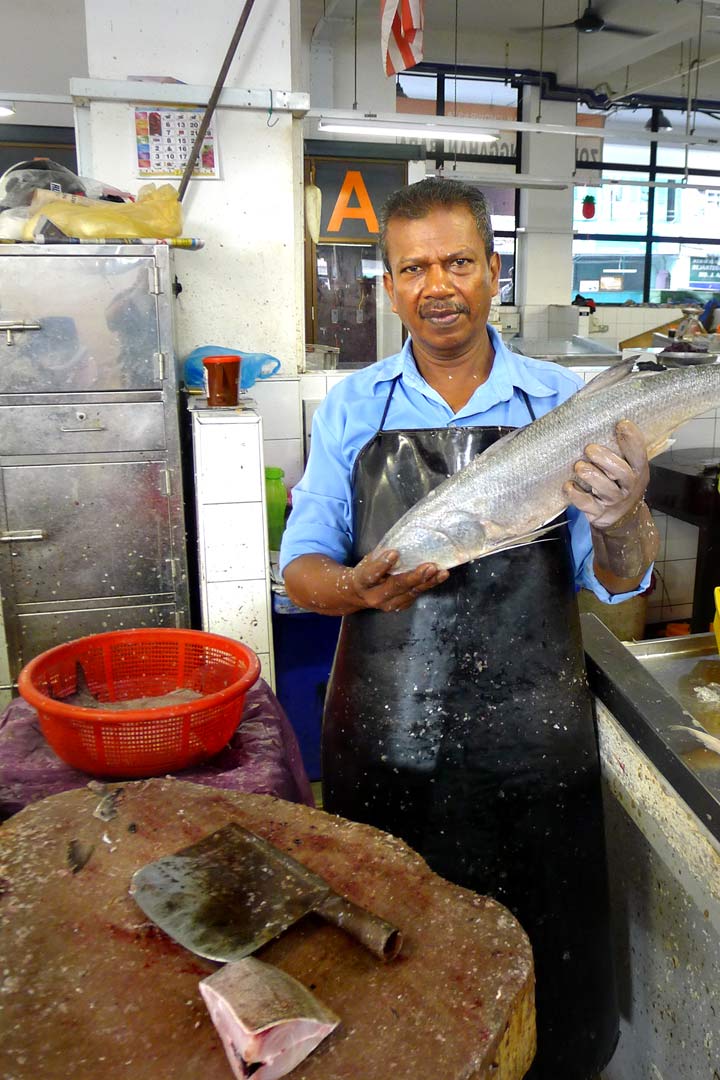 Chowrastra Market is one of Malaysia’s oldest markets, and where the original Tamils sold fresh produce and livestock, these days you can buy anything from foodstuff to fish-heads, sunglasses to sandals, everything at encouragingly low prices.

A street market in true Asian style, you move from shoe shop to fresh fish stall with its displays of assorted fish bits, baby octopus and large sardines glistening on crushed ice, to knock-off football kits (Real Madrid being pretty popular), and battery-operated maneki neko, the ‘lucky’ waving cat found everywhere in Asia and guaranteed to bring good fortune to the owner, to bakery supply store and noodle restaurant-cum-CD shop all in ten meters and four entrances.

Enter Chowrasta Market, or Chowrasta Bazaar as it’s also known, through the front entrance on Penang Road and you will be presented with displays of fresh and preserved produce. Pickled nutmegs; heh ko, a prawn paste unique to Penang; belachan, Malay chilli paste; tau sar pneah, Penang’s famous bean paste biscuits, or you may like to try the durian cakes, made from a fruit with such an obnoxious smell that it is banned from most hotels and railway carriages. Its saving grace is that, at least according to those who enjoy it, its rich, creamy centre is delicious. I’m no aficionado because to me it tastes as disgusting as it smells. 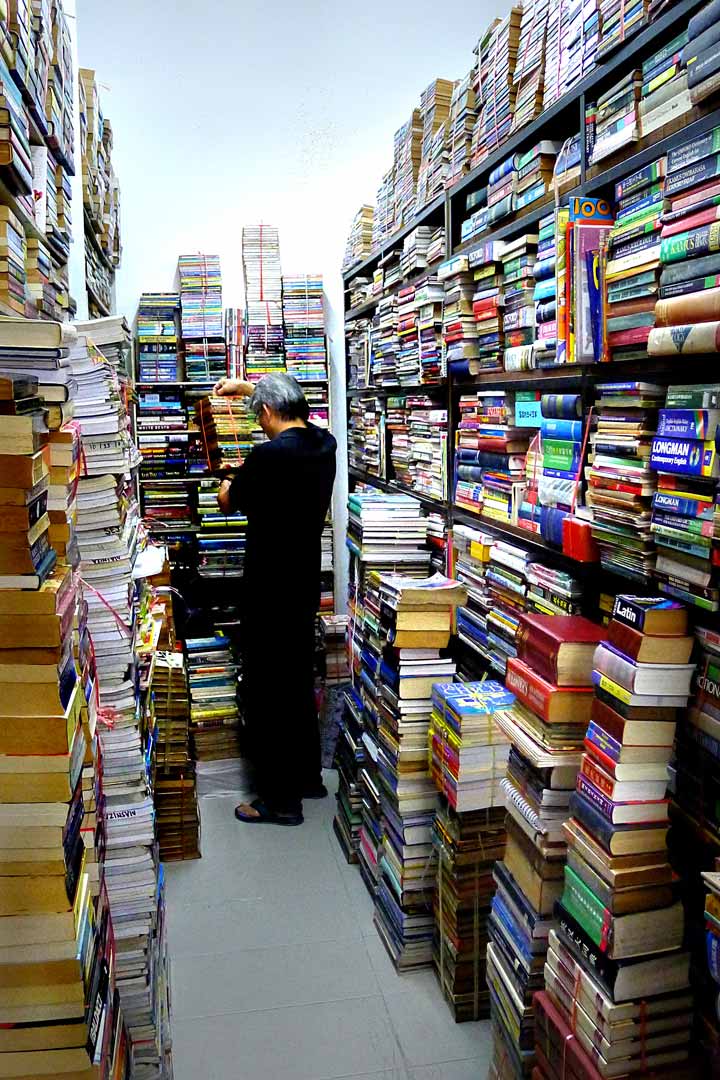 I wander in by a side entrance off Jalan Kuala Kangsar, straight into the fish market, with the babble of voices bouncing off the tiled surfaces and the clunk of cleavers on chopping blocks that are simply cut off sections of a tree trunk, well-worn with decades of fish cleaning.

Many of the vendors are Indian Muslims, catering to the needs of the restaurants in Little India. I meet Mr Habib, who joined his father in Chowrasta at the age of twelve and now has “forty-five years of experience”. Surrounded by a display of black pomfret, black barracuda and rabai chermin known in English as long-fin trevally, Mr Habib works six days a week preparing produce for his restaurateur clients. “Everyone must have one day rest for peace of mind and peace of body,” he tells me. His ‘one day rest’ each week might 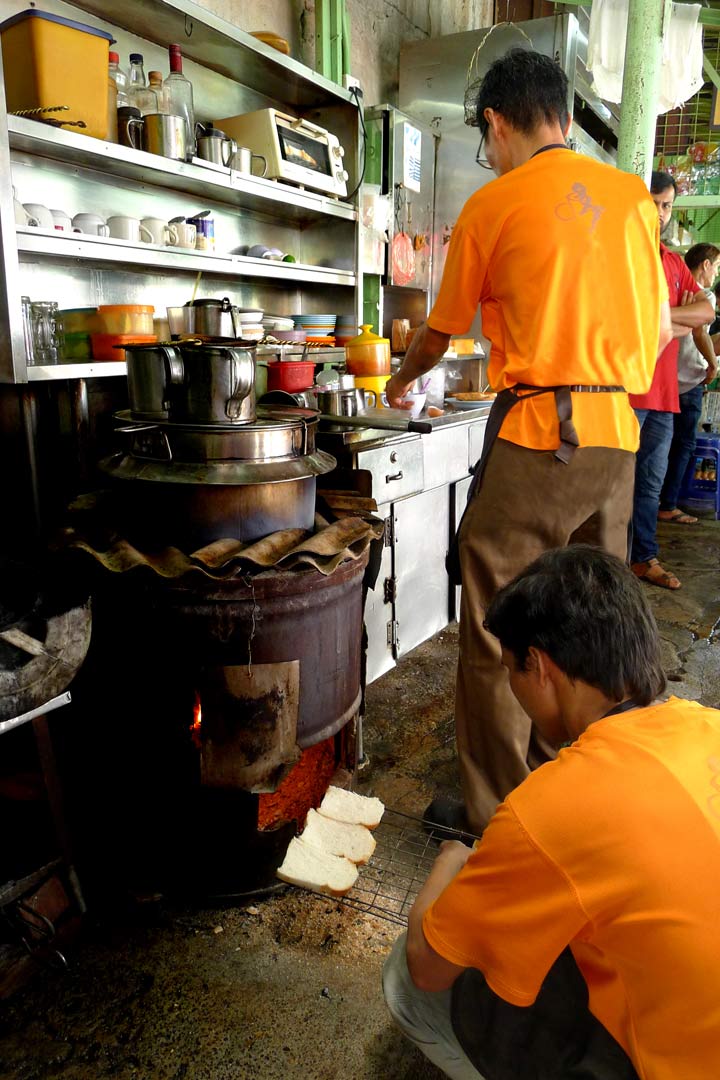 well be spent at the restaurant of one of his clients where he will enjoy black barracuda, his favourite, either curried, fried or spiced.

Next to the wet market is the vegetable section, although most of those on display would be recognisable from any western supermarket shelves.

Moving away from the tang of fresh fish, I climb to the second floor. If you need a good read the booksellers on level two have an enormous selection to choose from, 90% of which are in English. Boxed sets, bundles arranged by author tied with pink nylon string, single paperbacks, beautifully bound hardbacks. At ten ringit for an almost brand new Ian Rankin I don’t even bother to haggle. I don’t ever remember being in a market where I could buy a black barracuda and an Ian Rankin novel at the same time, so that’s a first for Chowrasta Bazaar as far as I’m concerned. Clothes stalls, a small food court and decent toilets take up the rest of the space on the second level.

At the end of Jalan Kuala Kangsar I turn left onto Campbell Street, once the Fifth Avenue of Penang and centre of the goldsmiths’ trade. The number of shops has greatly reduced but there are still some beautiful examples of Colonial architecture on display. The tiny alleyway on the right near the ornate metal arch that breaches Campbell Street houses Toh Soon Café, a Penang institution since Noah was a boy. Famous for its breakfast of soft boiled egg in a cup, two thick rounds of toast and a cup of stout coffee, it sets you up for a day’s work or walk.

Another left takes me onto Penang Street and I delve into the narrow alleys of Penang Bazaar, stocked to the rafters with beautiful Malaysian and Indian textiles, perfumes, piles of elegant songkok and opia, traditional men’s headwear, some of it beautifully decorated for weddings and special celebrations. Textiles shimmer in the draft from overhead fans. In side alleys tailors work old treadle sewing machines for on-the-spot alterations. Beautifully embroidered kataya – the traditional ladies day-wear but now reserved for special occasions are suspended from rails alongside brightly coloured men’s silk Chinese jackets.

In many ways Asian markets aren’t that much different from European street markets; cheap clothing, knicker and bra sets displayed on half-body forms suspended from canopies, fruit and veg, regimented displays of shoes, belts and wallets, although it’s unlikely you would see pork roll sticks or thin dark brown strips of dried chicken meat for sale in a Manchester market, and there would almost certainly be a shortage of stalls serving up bowls of chee cheong fun. But Asian markets somehow seem more vibrant – for which you could probably substitute the word ‘noisy’ – whether it’s the volume of chat or the music coming from every third stall. 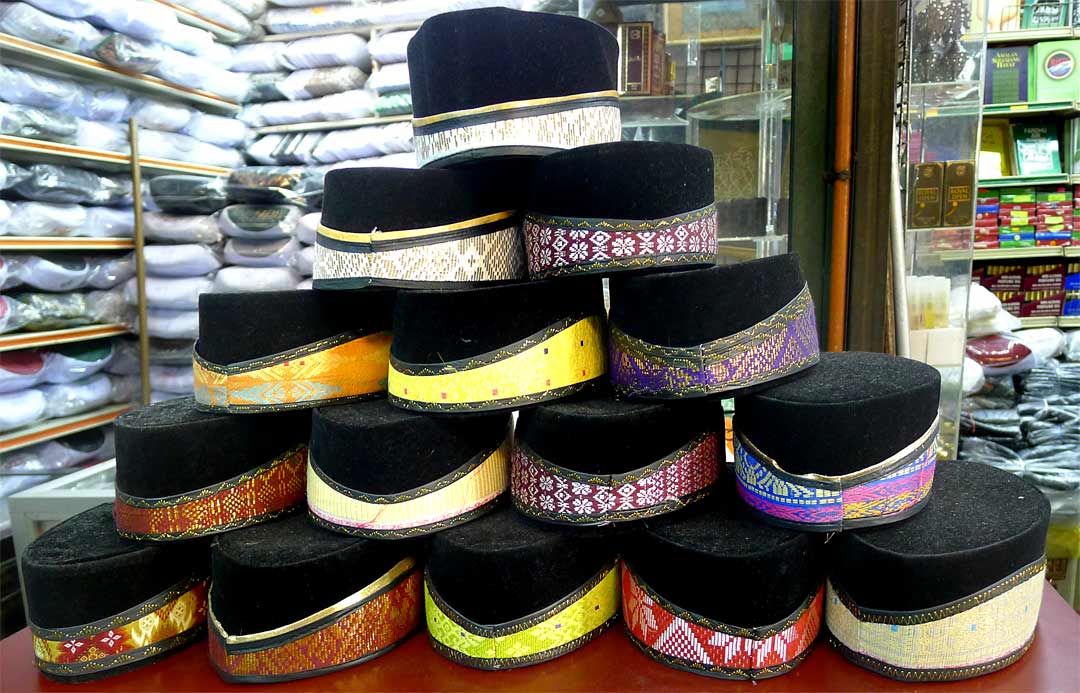 (If you visit Penang I highly recommend the home of Coln Lu and his wife, Monique.  They are a delightful couple who helped me enormously on my visit, pointing out good places to eat, providing lots of information and almost leading me by the hand to get medication after a minor incident. They also own an excellent juice bar. No money changed hands or benefits given for this promo, it is my personal opinion. Accommodation, Juice Bar.)