There are two things that Chinchón is best known for – the Plaza Mayor, a circular ‘square’, with it’s 234 wooden balconies, and Anis de Chinchón, but don’t try to count the former after a couple of glasses of the latter, especially the special dry, which numbs the tongue at between 70 and 74º alcohol.

I sit at one of the pavement cafes, warming myself on a chill, late-February morning with a glass of the sweet Anis, a mere 40º, and admire the lovely 16th-century three-storey houses with their green painted balconies, on one of which I’ll be having lunch later, but at this time of day I need a stiffener to get the circulation going. If I was a real man I’d be having sol y sombra, a sun and shade, anis mixed with brandy, but instead I have the drink of old ladies – straight anis – who supposedly use it for its curative powers, as an aid to digestion or simply to relax – they even say it keeps you young, and who am I to argue? 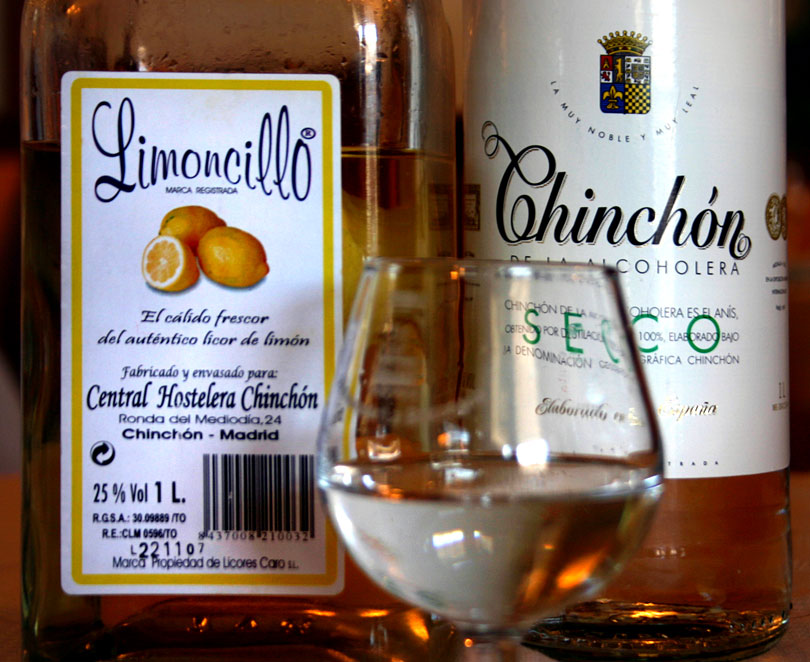 Anis takes its name and distinctive liquorice flavour from the anis seed, and variations of the aromatic drink can be found in almost every Mediterranean country; sambuca in Italy; ouzo in Greece, raki in Turkey, pastis in France.

The liqueur has been produced in Chinchón since the 16th century, and each wine grower would distil his own. Such was the fame of the purity of Chinchón anis that it was eventually named a “Royal House Provider” by Queen Maria Cristina in the 19th century, but these days there is only one distillery producing anis, Alcoholera de Chinchón, which, sadly, doesn’t allow visits.

Take away the cars parked in a circle and the scene wouldn’t have appeared much different to either Goya or Orson Wells. Goya’s brother was a priest in the town, and he spent a lot of time there painting. One of his works is in the imposing 16th-century church, Nuestra Señora de la Asunción (Our Lady of Assumption), a mix of Gothic, Plateresque, Renaissance and Baroque styles that sits broodingly on the top of the hill overlooking the Plaza.  Orson Wells went there in the mid-60s to make two films, The Immortal Story and Chimes at Midnight. It’s said he liked to have his anis shots in the morning with the locals, and loved the food and the bullfights for which the circular square is still used.

The origin of the Plaza Mayor goes back to the middle ages when it was used for livestock fairs. The views from the balconies were so important that ownership of the houses and balconies is separate, and there are legacies that consist of having a single chair on the balcony – presumably to watch such stirring events as the filming of Around the World in Eighty Days. 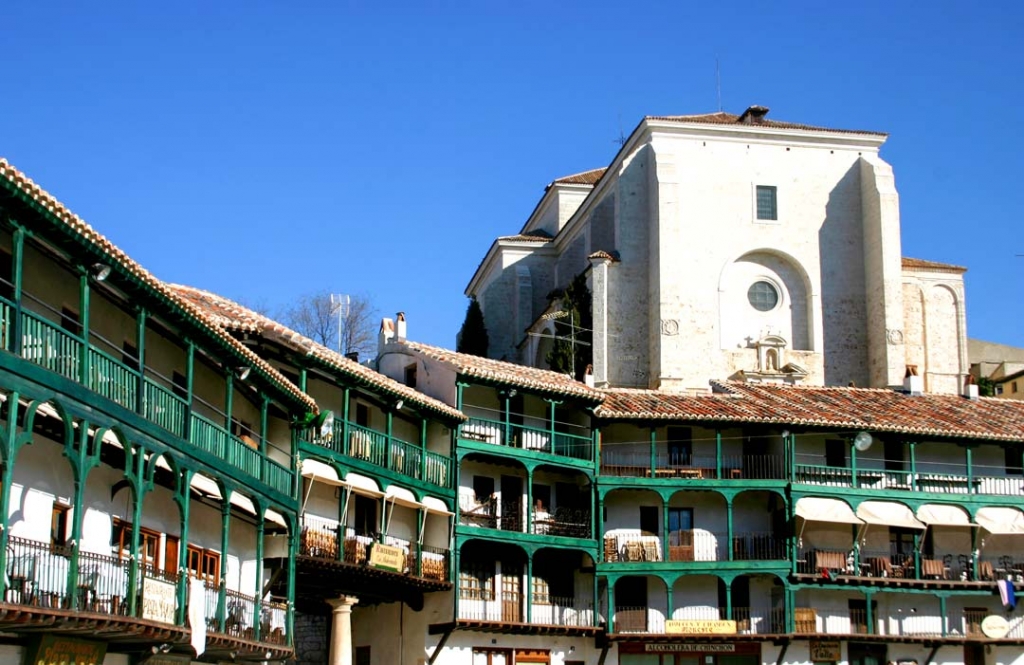 Warmed up, I take the steep climb up the hill to the church. In times past, during the bullfights the streets would have been filled with los lagartijas, the lizards, lovers of the corrida who couldn’t afford the entrance fee and wanted to see the bullfights for free. So many would gather in the Plaza de Palacio, the gardens in front of la Asunción, that it became known locally as ‘el balcón de los largartijas’ – lizard’s balcony. The Palacio de los Condes, which gave its name to the gardens, now no longer exists, its spot taken by the petit Teatro Lope de Vega, a beautiful 19th century building dubbed the Pequeña Bombonera, the Little Sweet Box.

Chinchón is said to have a church without a tower and a tower without a church, referring to the fact that the Torre del Reloj, the clock tower, stands all alone, fifty metres from la Asunción. But it’s simply a confusion of positioning, because the tower is all that remains of the Iglesia de Nuestra Señora, the rest destroyed by Napoleonic troops during the War of Independence.

From the terrace in front of the church I look way across the rooftops of the town, to the ruins of the 15th-century Castillo de los Condes. Once a bulwark in the defense of Chinchón during the War of Independence, it was destroyed by bombardment and fire, its stones later taken for the repair of roads and building houses. It ended its life as an anis distillery. 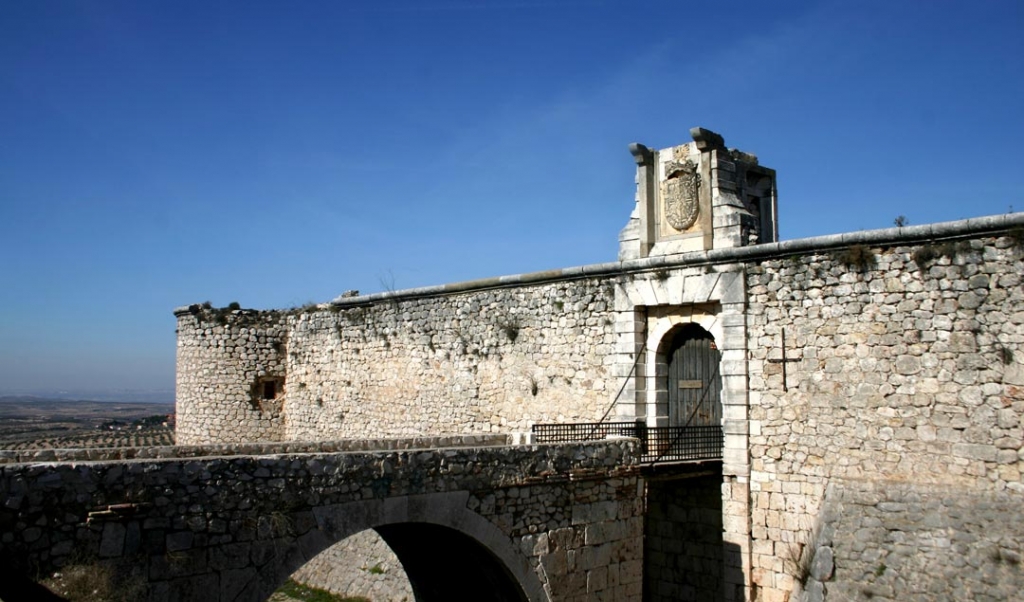 I continue my wander through cobbled streets, and, it being mid-week and mid-winter, I was almost a solitary figure, but at weekends in summer it’s a different story. Being only an hour’s drive from Madrid, it is a popular day out for city folk, not just for its prettiness and anis, but for its excellent restaurants. Roast lamb, pork and beef, sweetbreads, sheep’s curd and almond biscuits are among the local traditional dishes.

When I have lunch at La Balconada, which, as its name suggests, has a balcony overlooking the Plaza Mayor, I try sopa de ajo, a rich soup made with plenty of garlic (another specialty of Chinchón), two-day old bread, olive oil and hot paprika, enough to fortify the heartiest of field workers, for whom the recipe was ‘invented’. I follow this with cochinillo, suckling pig, which, when served whole is supposed to be so tender that the chef chops it with the side of a plate. It would have to have been a pretty strong plate to get through the crunchy crackling of my section of rib, but the flavour was superb, and I could feel the calories from the almost liquid fat surging through my arteries. And, of course, no meal in Chinchón would be complete without an aperitif of anis.

Lacking the possibility of visiting a distillery, I decided to gather all the information I needed from the very amicable waiter, who, probably from years of experience, told me everything I could possibly want to know about the clear aromatic drink – and it would have been disrespectful not to have savoured the samples he brought to my table. I never like to offend the locals.