For six weeks during the winter of 1996, the Kasbah du Toubkal was clad with stonework, prayer wheels, wooden doors and Tibetan domes to transform it temporarily into the Monastery of Dungkar, for the filming of Martin Scorsese’s epic, Kundun, the story of the Dalai Lama’s escape across the Himalayas from Tibet to India. All that remains of the event is a model of a deer on its haunches, set above the main entrance.

The Kasbah briefly became a Tibetan monastery again for two days when scenes for the TV programme Lilyhammer were recorded in its gardens and on the hillside outside the gate.

The scenes depict the return of one of the main characters to a monastery to find peace after years travelling the world making his fortune. The crew and actors were up at 4 a.m. to catch the early morning light on the mountainside. I’m no early riser, but they are still on the hillside four hours later when I go to the roof terrace for breakfast. 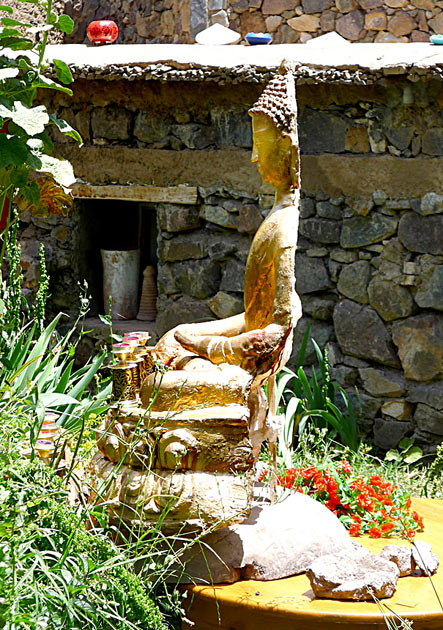 I hear call a of ‘action’, and what appear to be two heavily laden Tibetan peasants (and bear in mind I’m watching from a few hundred metres away), laboriously struggle down the rough mountain track for about twenty metres, stop and laboriously climb back up towards the camera to check the take. It takes me a few minutes to realise that one of the peasants is actually pulling a wheelie case, which, apart from looking a bit out of place jostling along the stony track, is probably not what the manufacturers had in mind when they took the wheels designed for in-line skating and stuck them onto the corners of a suitcase. And I suspect there aren’t many in-line skaters who would take a one-in-five descent on a stony mountain track.

While the filmmakers are re-taking and re-taking the thirty-second shot, I fall into conversation with a delightful gentleman sitting at the next table.

Dr. Trung Hau was spotted three years ago, star-gazing as a film crew recorded a sequence for a film in Casablanca. He was approached by a member of the ensemble and asked if he would like to play the role of a Tibetan monk. I suppose it’s the sort of thing you expect on a quiet day in Casablanca. Despite being Vietnamese, Dr. Trung’s warm, angelic smile, round glasses and stubble haircut perfectly suits him for the role. His photo was put on file and occasionally he would pop up in scenes as his adoptive character, the Tibetan monk.

But Dr. Trung is a real-life stargazer, and until his recent retirement he worked as an astrologer at the Centre National de la Recherche Scientifique, the largest science agency in Europe, where, amongst other things, he examined the samples brought back to earth from most of the Apollo space shots, and co-authored the splendidly named Cosmic Butterflies, which sounds like the name of a seventies rock band in tie-die T-shirts, but is actually about an unusual astrological phenomena.

The wanderer is welcomed back to the monastery by the monk who befriended him on his first visit many years ago, played by Dr Trung, who greets his friend in the gardens in front of a gilded statue of the Buddha with his single, immortal line, “We have the same room ready for you.” Once his line is delivered, Dr Trung, his niece, Tran Minh, who had accompanied him for a break from her work as a piano teacher in Casablanca, and two of his twelve grandsons, one of whom was to act the silent role as the monk’s guide, set off down the steep track back to Imlil and onward to their flight back to Casablanca. 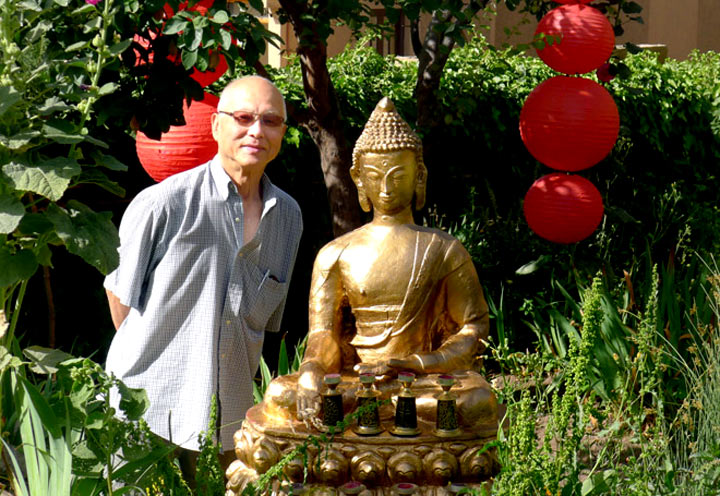